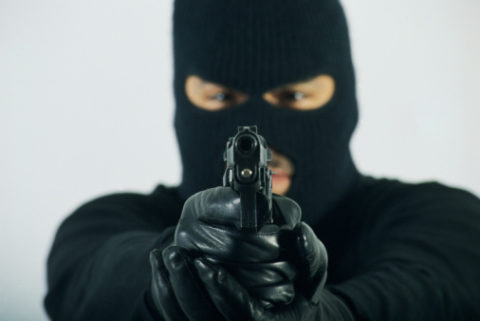 I pulled my last armed robbery 18 years, three months and 29 days ago—but who’s counting? It was a totally botched job. I was too high on drugs and afterwards the cops came to my house and arrested me. When I look back on that time in my life, I don’t recognize the person that I had become. What rational person really goes into a bank with a loaded gun and demands money? Usually not well-educated-middle-class-alternative-arty-type dudes, but that’s who I was. Only I had slipped deep into heroin addiction and life had become as they say, unmanageable.

After an agonizingly uncomfortable weekend withdrawing from heroin in county jail, I was brought before the judge for my arraignment on two counts of armed robbery. I was weak and disheveled. I hadn’t brushed my teeth or showered in days. I was dressed in orange and there were chains wrapped around my waist and ankles that were attached to the handcuffs on my wrists. I imagined that I looked like the caged wild animal that I felt like.

Totally uninterested in my surroundings, I sat in one of the chairs along the wall of the courtroom reserved for those in custody. Every one of us looking quite guilty in shackles and handcuffs, biding our time before we were called in front of the judge. On the other side of the railing were our family and friends. I tried to see if anyone was there for me, but it was so crowded I couldn’t tell. None of my family had bailed me out over the weekend, so I doubted if they’d be at my arraignment. The fact that my bail was a million dollars, and no one had that kind of money, or trusted me not to abscond, didn’t stop me from being resentful. Didn’t they know how horrible this was for me?

When it was my turn the bailiff grabbed me by my arm and dragged me over to the podium in the center of the room facing the judge with my back to the spectators. A Public Defender I’d never met stood next to me. A man across from us said he was the District Attorney. I really wanted a cigarette and wished this was over so I could go back to my jail cell. The judge said, “Mr. O’Neil, you’re being arraigned on two counts of robbery in the first degree, section 211 from the California penal code. How do you plead?”

I thought that was going to be it and the deputies would now pack me off with all the other degenerates back to county jail. But the DA stood up and said that he was seeking a three strike, twenty-five-to-life conviction, and I was like, “huh?” The judge asked me if I understood the charges.

“Are you fuckin’ kidding me?” I responded.

When I eventually did make it back to the cozy little cell I shared with an alleged serial killer, I realized my life was over. Drugs had taken me down a road there was no coming back from. And that night, when the rest of the cell block was asleep, I actually cried for the first time in many years. The next day out on the exercise yard, a caged-in piece of blacktop with a bent basketball hoop, I vowed that I was not going to spend the rest of my life in prison. I didn’t know how that was going to work exactly. But if there was anything I could do, it was not going to happen.

After a year and a half of plea-bargaining I was finally sentenced. I was convicted of two felonies—two strikes. The DA told me that I was simply not the kind of drug addict that was going to go straight. That it was only a matter of time before I committed another felony and that would be strike three. “This way is so much more cost effective then a long drawn out trial,” he said.

I did my time in prison, but I had a release date, which is more than most of my fellow convicts had. When I got out on high control parole I checked into a drug and alcohol rehab. I didn’t exactly know how rehab worked, but I knew that if I stayed out on the streets, the DA would get his wish and I’d be doing life. I’d like to tell you that the first rehab worked, but it didn’t. It took another stint in another rehab before I found the rooms of Narcotics Anonymous and started working the 12 steps with a sponsor. It wasn’t easy at first but I kept at it, the alternative was too horrific a future to not follow through.

When I completed treatment I got a job working as a counselor at another residential rehab. It was a scary facility for parolees and the mentally ill straight out of jail. I worked there for years, giving back to a community I had only taken from before. I’d like to think that my work there made a difference. It was definitely a humbling experience for me, and ultimately working with recovering addicts and alcoholics kept me clean as well.

Eventually I went back to school and got my masters degree. A few years later I moved to another city and began teaching college. In between semesters I wrote a memoir about my past and getting my life together. Last year it was published and I went on a national book tour to promote it. I now teach at two different universities, I facilitate writing workshops, I’m a contributing editor for a literary journal, I write for numerous publications and once a week I run a creative writing group in a recovery center. My life has turned into something I never imagined it would be. I continue to attend meetings, work the steps, sponsor others, and be of service—and I can truly say that I have never been happier.

On September 24th, 2015 I stood in front of a judge in Department 100 of the Clara Shortridge Foltz Criminal Justice Center, Superior Court of California for Los Angeles County. I had been working with my pro-bono lawyer to request my felonies be expunged and my record cleared. Only the State of California doesn’t grant expungement for felonies where the offender served in state prison. So we were trying for an alternative. I had filled out all the required paperwork, written out detailed explanations taking full responsibility for my part in all my crimes, submitted letters of recommendation and copies of my diplomas and other evidence of self-improvement since 1997.

The judge looked at my paperwork, asked the DA if there were any objections and when there weren’t, signed a California State Certificate of Rehabilitation, which automatically applies to the Governor of California requesting a full pardon.

Standing at the docket with my lawyer, looking around at the DA and the lawyers arguing the fates of others—it all felt surreal. I got a little teary eyed and experienced an emotional level of calm and wellbeing I’d never felt before.

Last week the certificate arrived in the mail. It may not be a full pardon, yet. But it is recognition of all the work I have put in to changing my life for the better. Today I’m a far cry from that drug-addict-armed-robber sitting in a jail cell, who thought his life had ended. And yeah, I feel pretty damn grateful to have survived all of that and to come out of it not only alive, but a better human being.

This post is dedicated to Natasha Deón without her hard work and support I would probably have never even attempted to navigate the complexities of California’s Criminal Justice system, nor would I have been able to write this essay. Please, if you haven’t already, show some love and buy her amazing novel GRACE.