9 People To Avoid At 12-Step Meetings 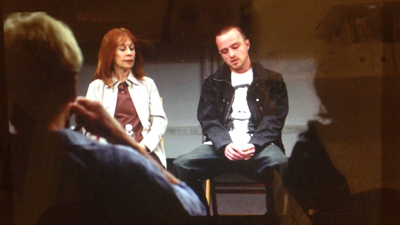 Yet every once in a while I get the crazy notion that I need to switch things up and hit another meeting or two. I usually come to my senses fairly quickly. Because when I venture out of my familiar territory, I almost always run into the dreaded “recovery” stereotypes that made my first few years of meetings almost unbearable.

In the beginning I had a hard time with the concept of “principles before personalities.” Overzealous Big Book thumpers would push my buttons, rigid rule adherers caused me major anxiety and chronic relapsers sent me into a judgmental free-for-all. But nowadays I have fine-tuned my bullshit radar and instead of letting those people and their behaviors get under my skin, I gravitate to those that do not make me cringe. In other words, I make a point of hanging out with the “winners”—those that actually have a program of recovery—and in doing so have found the support I need to stay off of drugs and alcohol.

Now I don’t usually tell people what to do, or give out unsolicited advice, but I’m going to share with you how to recognize these folks so that you too can avoid them.

You know those people; they’re the ones that have no problem telling the entire meeting way too much information about themselves and what they’re going through. They usually sit up front by the speaker so that they’ll get called upon to share. Before the speaker has even finished qualifying, they’ve got their hand raised. Then they’ll stare down the secretary until they get picked to share and unload all their dirt. After a few meetings you’ll know more about them then you do about yourself. The only problem is that they never do anything to actually change their lives. Somehow they have missed the part about “doing the same thing over and over again and expecting different results.” Run away or expect to hear them yammer on about the same issues for eternity.

These poor souls are easy to recognize because they usually have their “recovery” literature in some weird faux leather book cover that’s strapped to a bible. Most likely they will begin every share with something like, “First off I would like to thank my Higher Power who I choose to call Jesus Christ.” They will then mention their church, their pastor or priest, and how the only way to stay sober is to get on your knees and pray. After the meeting they will endlessly pester you to come to their place of worship “just to check it out.” Now it’s nice that they’ve found what works for them, only nowhere in any 12-step literature does it say that you have to follow a organized religion—in fact it clearly states “God as we understood Him.” Sounds like a personal choice to me. So when someone starts shoving his or her brand of “salvation” down my throat under the guise of recovery, I feel like I can smell their crack pipe just minutes away from being lit. I have never met anyone that stayed clean and sober with just religion. No matter if they were a Buddhist, Jew, Muslim, or Christian, a religious program is not a program of recovery.

Ever look over at someone’s recovery book and see that every damn sentence has been highlighted with that same day-glo yellow marker? Yes, there’s a ton of pertinent information in the literature, but to highlight every word is nothing short of overkill. Can you say OCD? Same said for the “dictionary definitioner”—these people look up every word they read as if the definition is somehow going to unlock the “recovery” mystery. I could be wrong here, but how about you just read the book and do the steps with your sponsor?

Even people outside of recovery are familiar with this term for smarmy men and women with a lot of time under their belts that prey on a newcomer’s vulnerability. Under the guise of “support,” these people strike up a relationship solely for the purpose of having sex. They are not your friends, nor are they following the principles of recovery. If you still need another reason to judge them, keep in mind that the arbitrary “no relationships for the first year” rule was surely instigated because of them. Really, you can’t work on your issues if you’re busy trying to not come off as undamaged goods to that hottie with a lot of time that keeps inviting you out for coffee after the meeting. So if that cool old timer is coming onto you after you’ve just introduced yourself as a newcomer, tell that predator to keep it in their pants. Not to state the obvious but having sex with someone with double digit sobriety will not keep you clean.

5) The “Prescription Drugs Were Not My Problem” Dude

We’ve all met him. He’s the one that smokes medical marijuana, or takes a ton of Xanax because a doctor prescribes it. He usually starts off his spiel with some line about how bad illegal street drugs are, but these other substances are “medicinal” and they’re what keeps him sane. Sadly, dude is in denial, like big time. He has just switched addictions and unfortunately he will be taking along anyone who starts to believe his misguided ideas. You can usually identify him because he’s slurring his words. This is what we refer to as “Keith Richards clean.” So dude, just do us all a favor and stop lying about your clean/sobriety date because you’re using.

You know the mega-sponsor that thinks the more sponsees he or she has, the better the program of recovery? I’m not talking about the legitimate awesome sponsors with longterm sobriety that naturally attract sponsees. I mean the folks with only a medium amount of sober time who actively collect people. “I’m your sponsor,” you’ll hear them say to a newcomer. But that new sponsee needs to probably get in line and take a number because the sponsee collector is too over extended to actually sponsor anyone correctly. You can spot them because they always share about the amazing step work session they had with their 20 sponsees just before the meeting.

Having a meeting commitment is awesome and a really good way to get involved. However having a commitment at every meeting you attend is a little overboard. If someone is a GSR at the Monday meeting, the secretary for Tuesday, Wednesday’s treasurer, the literature person on Thursday, H&I at the county jail on Friday, chip person at that really large Saturday meeting, and the coffee maker for the Sunday book study, well, she’s over extended herself. Usually this is someone that doesn’t want to actually work a program. Though they’re actually help out a lot, just don’t follow in their footsteps or you will never get your step work done.

8) The In the Rooms Dater

I have a friend that dated so many women that he had to switch fellowships. He didn’t want to leave—he actually really liked the fellowship he was in—but he once told me there was nothing more terrifying than walking into a room where you have had sex with 90% of the women and they all hate you.

You know this guy. In fact you’re reading his stuff right now. He thinks he has this whole thing figured out, and for him, maybe he does. Just don’t take his word for it. Go out there and see what works for you. Maybe oversharing is the right way for you to get it all out so you can move forward? Maybe you need to date an entire meeting, or get a ton of commitments, or find “your lord and savior”? Who knows? Definitely not you, and until you explore every possibility and decide for yourself, you’ll never know.