Can I Resist a Cocktail on a Plane? 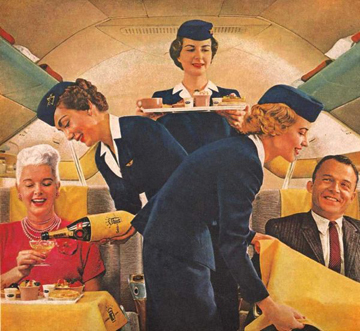 I’m on a plane. The flight attendant is handing out drinks. A woman across the aisle has ordered a Bloody Mary. It looks really good. Inviting even. I don’t like Bloody Marys. There’s too much going on with them. All that tomato juice, hot sauce, vegetation and ice, competing with what’s really important—the goddamn vodka. Back when I drank, I had a healthy disdain for this sort of complicated drink. But for some reason, I’d really like to order one right now. Just say, “Fuck it,” be a regular guy and go for a cocktail.

This is not normal behavior. I have 14-plus years in recovery. I don’t drink. Besides, I was a terrible alcoholic. I was a drug addict. But I’m on a national book tour, supporting my first book, a memoir about being a drug addict. Which is all oddly déjà vu-ish, as I used to also be a tour manager for bands back in the ‘80s. I did a lot of drugs out on the road and drank more than my fair share of alcohol. And now, 30 years later, I’m on tour again.

It’s decidedly not a rock and roll circus—but all the stress is here, that same old logistical nightmare of getting to the gigs on time, of hotels and airplanes. And there’s this nagging voice in my head that’s telling me, “You’ve done a good job, now it’s time to drink a beer, shoot drugs, relax, reward yourself, you deserve it.”

My last major rock and roll tour was 1986. I was so strung out on heroin I barely remember it. I was on the road for two months, hitting every major city in North America. There would be mornings I’d wake up and not know where I was or, still worse, where I was going to score the drugs I needed to keep me going. But addicts are cunning and I always managed to find the rough side of town, a sleazy bar, kindhearted knowledgeable hookers, or to simply wander by the methadone clinic looking like I was in need. I thought nothing of putting myself in harm’s way. It was all about the drugs and life was just sort of secondary.

These days, I’m still an addict, but I’m an addict in recovery who goes to meetings. I hit at least five a week and whenever I travel I still make meetings. In fact, I was just at one in New York City not five hours before this flight. It was one of those odd noon meetings where there’s that special mix of folks fresh out of rehab and old timers with a lot of years. It was in the basement of a synagogue on the Lower East Side—one of those neighborhoods that I used to score dope in. When the secretary asked if there were any out-of-town visitors, I introduced myself and said I was from LA. A tough-looking woman hugged me afterwards, a newcomer wanted my phone number, and nothing about being there made me want to use.

But now as I sit here on this plane among all these “normal” people ordering drinks, I have this burning desire to be one of them. Although I don’t usually covet a Bloody Mary, I do crave alcohol as a way to not feel my emotions, and being out here on tour is stressful. My negative inner voice kicks in big time, telling me I suck, I don’t know what I’m doing and I’m going to fail. And because I’m also on my own, I think that no one will know, I can get away with it. And, really, what’s so bad about one tiny airplane bottle of vodka?

But the truth is, I’ve been down this road before. One drink is never enough. Eventually, I’ll take the plunge and go for my drug of choice and, once I cross that line, I’m off on a run—a run I don’t know for sure that I can make it back from.

Sadly, I’ve been seeing a shockingly large number of people who had multiple years now raising their hands at meetings as newcomers. I’m not sure if it’s due to the chaotic society we live in, the bad economy or how readily available drugs seem to be these days. But not a one of them has said what a great time they had out there using, and all of them look pretty beaten down and dejected.

Fortunately for me, their relapses serve as a warning—there but for the grace of God, go I. In fact, they scare the hell out of me, as I know just how quickly I could lose everything I have worked so hard for. Just getting my first book published and being on tour is a miracle in itself and, without my program of recovery, none of that would have been possible. In the past 14 years, I’ve gone from being a nervous neophyte with no idea how to live life, to a published author and college educator. I changed my lifestyle so drastically that the 1986 “me” wouldn’t even recognize the “me” of today. And I absolutely don’t want to let any of it go.

So when the attendant asks what I’d like to drink, I tell her a club soda. Then I open my laptop and get on the national NA website and look for the nearest meeting for when I land. I’m pretty sure I’m also due for a call to my sponsor, and maybe even to check in with a sponsee or two. Being in the solution momentarily stops the negative inner dialogue that has been playing like a tape loop inside my head. I really can’t afford to entertain thoughts of relapse, and focusing on what’s at hand helps.

You can never go back home to the past. And with what I have now, why would I want to?