Do I Really Have to Be Rigorously Honest? 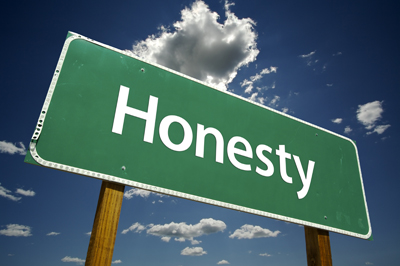 I was not the most honest person when I was using drugs. I’d lie, cheat and steal from everyone that I ever came in contact with. Basically I was your typical heroin addict. You probably know the saying: “How can you tell when a junkie is lying? His lips are moving.” But what I have learned since coming into recovery is that if you want to stay clean, you have to be honest. There is nothing more detrimental to a program of sobriety than secrets and lies. And once you start going down that road, you’re pretty much in the slippery territory of relapse.

But then, for a telling-the-truth-challenged recovering addict like myself, I didn’t actually know what being honest entailed until I came into recovery, and in the beginning it wasn’t easy. Like when I’d just gotten off drugs and wasn’t quite sure I really wanted to be because the lure of deadening my feelings was still quite desirable. One day I was at a meeting and the speaker was all drug-alogue and no recovery; when he described using heroin in detail, I got the urge to use so bad that I was shaking with anticipation. My brand new sponsor was sitting next to me, and it must have been obvious to him that I was having a hard time even though he didn’t really know me yet.

He asked if I was okay and because I didn’t want to admit that I wasn’t, I just said yes and left it at that. Later that night I found myself in the worst part of the city window-shopping for drugs, telling myself I was just down there to see if the dealers remembered me and if the bags of dope were the same size. I was so close to using I could actually taste it, and that’s when I knew I was in trouble. Thankfully I made it to a pay phone and called my sponsor; just by telling him where I was and what I was doing made part of the urge to use slip away. But it wasn’t until he came and picked me up and I was safely sitting in his car that I was able to get honest and admit that the speaker at that meeting had triggered me. Although not surprised, my sponsor asked why I hadn’t said something, and I realized that I didn’t want anyone—especially my sponsor—to perceive me as weak. My ego was still worried about the image I projected in a room full of people that had already surrendered. Obviously I still had a lot to learn, but what I came to terms with that night was that not telling the truth had almost cost me my sobriety.

After that, I really got serious about my recovery, and every time I was at a meeting and heard someone read the phrase in the preamble—“Those who do not recover are people who cannot or will not completely give themselves to this simple program, usually men and women who are constitutionally incapable of being honest with themselves”—I’d promise myself that from now on I would be totally honest in all my affairs. And then when I had 10 months clean and was at a bank cashing my first paycheck in sobriety, the teller made a mistake counting the crisp new $100 dollar bills and there was an “extra” one in the pile. As I recounted the money, I got an adrenalin rush like I was stealing.

Immediately, thoughts of entitlement performing moral gymnastics danced through my head as I scrambled to justify my ill gotten gains; times were tough, funds were low, I could really use the extra cash, it was the teller’s fault and not mine, I’m innocent, this isn’t stealing. I had left the bank and was in my car about to drive away when I remembered “Those who do not recover…are constitutionally incapable of being honest.” Reluctantly I returned and gave the money back.

“Wow,” the teller said. “I would never have done that.” For a second, I felt like a fool. Only then did I realize that being honest wasn’t for others, it was for me.

Yet even with that realization firmly etched into my brain, there were still times I would consider lying as an alternative. When filling out job applications, there is nothing more discouraging than having to check the “yes” box for the “Have you ever been convicted of a felony”” question. It might as well be renamed the “Please disqualify yourself from ever being hired” box. Because whenever I admitted to having felony convictions, I would never get the job. I’m not saying this to garner sympathy, or to deflect the blame onto anyone else but myself. I understand how I look on paper. Yet when it all comes down to a checked box deciding the quality of who I am today—well, it all seems rather futile. But then the reality is if I did omit the truth, a background check would disqualify me anyway. So really lying wasn’t even an option there either.

And then there was my overly obsessive need to divulge my recovery status. I had no problem informing anyone and everyone I was in a 12 step program. In fact, much like when I was proud to be a junkie, I wore sobriety as a badge of honor and felt compelled to tell complete strangers that I was no longer using drugs or alcohol. Being clean had become my identity and I thought that by telling everyone the truth, I was working an honest program. Only there’s such a thing as too much information and the program’s spiritual foundation of anonymity, and all I was really doing was reinforcing my determination to stay clean by saying it out loud.

Yet even when I celebrated a year clean, the whole “honesty” concept was still somewhat confusing. I judged other addicts for what I saw as inconsistencies in their programs, and I had no problem telling everyone what I saw as their truth. Yet I didn’t know how to discern what was being honest, and what was just being rude and obnoxious. Like when my girlfriend asked if the jeans she was wearing made her ass look big, and I said in all honesty that yes her ass looked big because her ass was big and the jeans just sort of made it more obvious. Of course this did not go over well. Her feelings were hurt, and I felt like shit for making her feel bad. But I had told the truth, right? Only sometimes people aren’t asking for the truth. Their simple questions are really much deeper, concerning the unsaid need for support and the showing of love. But I was perplexed as to where the fine line of honesty stopped and compassion began.

Eventually I came to an understanding of what the truth was, and what was personal, and what was none of my business. I now realize that honesty is more than just not lying. It is how I conduct myself, how I treat others and how I walk through life with grace. I don’t openly lie, but I do not need to honestly tell everyone what I think. I am not responsible for overseeing all honesty; I only need to oversee my own integrity and accountability. It is not always easy to not be self-righteous, but when I finally worked the steps and found a place of acceptance for those around me as well as for myself, I found peace and an understanding of what truly being in recovery means.