It’s eleven-thirty pm and he’s standing on the front porch of a slightly disheveled two-story wood framed house. Located on a dark side street, across from the gas station, and the men’s rehab next door. Hesitant, he reaches to press the doorbell, but stops. Glancing up he sees the camera. Pictures his digitalized image on a monitor somewhere in the building. Wonders if they save the discs, and if his every move will be recorded.

An LED computerized sign in the window glows “OPEN.” Underneath a multicolored swirl arches outward. Otherwise all the windows are dark, the curtains drawn tight. He turns to glance around. Watches the passing traffic up the street, the one that feeds onto the freeway. 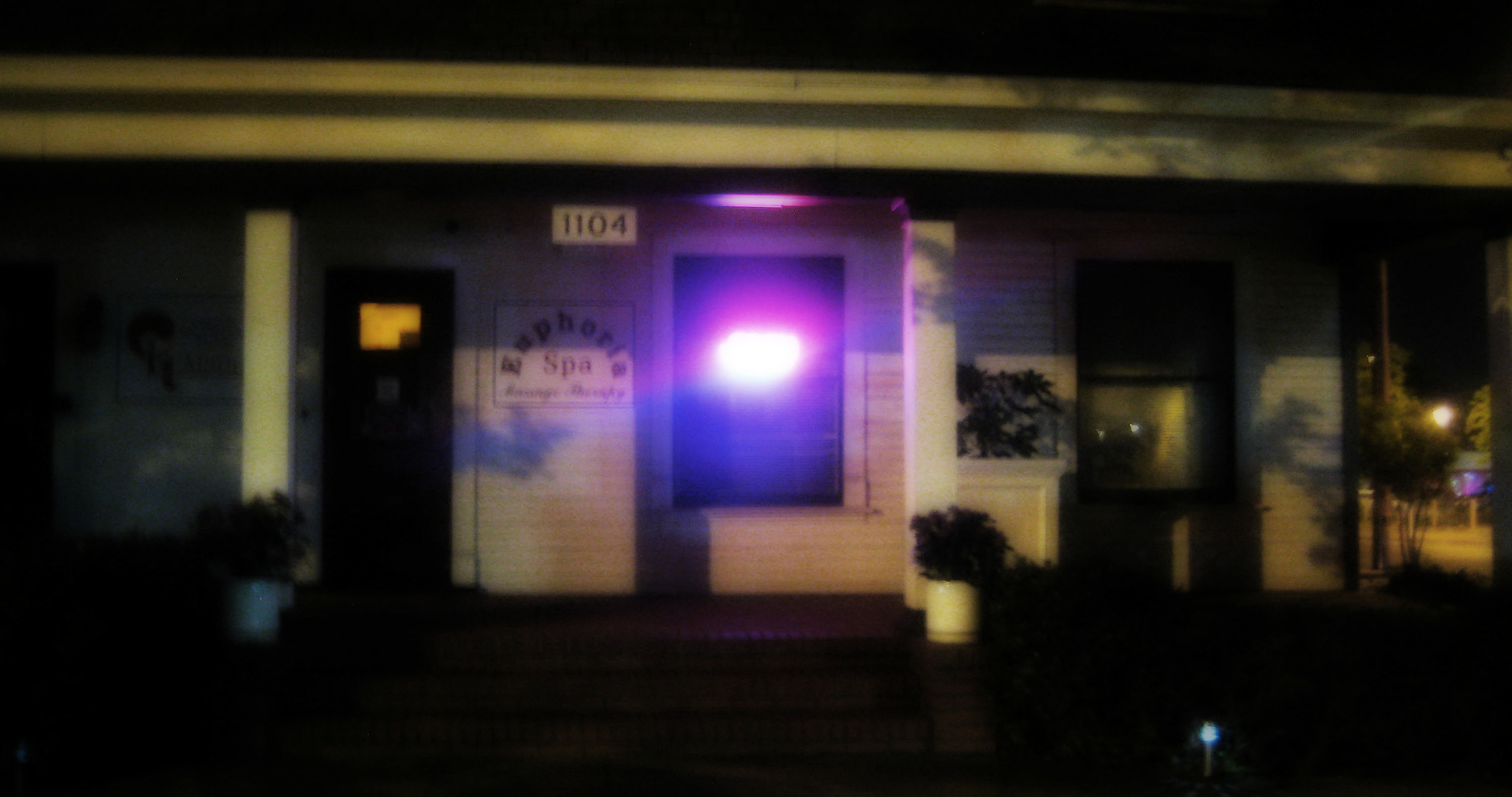 He taps his foot. He’s nervous.

Across the street, sitting on the steps of the rehab, two people huddle and watch. They’d been walking home and noticed him circling the block in his car. He kept passing the massage parlor and slowing down, looking around, acting sketchy. Then driving off only to return and do it all over again.

She’d recently moved into town and they’d been out walking. Before, she’d lived in the hills, west of downtown, over in a damp valley, under the trees, perpetually in the shade. Although she’d lived here all her life, this neighborhood was new to her. And what really surprised her wasn’t so much the homeless and crazy street people that wandered down from the methadone clinic and congregated around the shelter and soup kitchen; it was all the massage parlors that seemed to be everywhere. This one, the Euphoria Spa, just happened to be the closest to her new home. 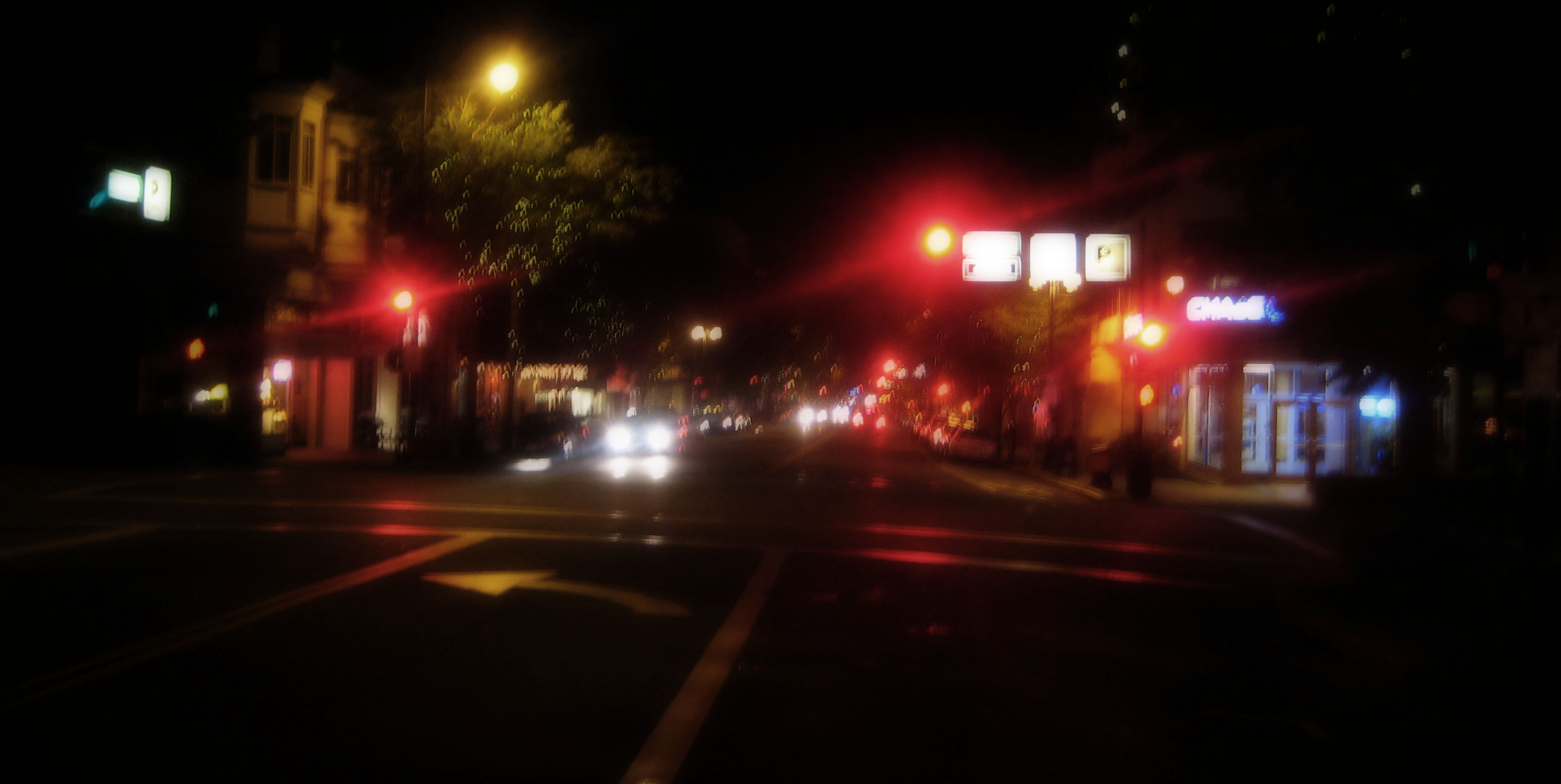 The lure of all this illegal activity in a town with a population a little over fifty-seven thousand, and just eighteen miles north of San Francisco, provoked great interest and she felt a need to observe it first hand. The night before she and the man had checked the Internet. Looking at the local massage parlors and spas. An oddly creepy website: rub maps dot com – listed the Euphoria Spa under “erotic massages.” Past clients had left detailed comments and ratings on the masseuses: their body types, sexual attractiveness, and ability for hand and blow jobs. The Euphoria’s masseuse was described as “30 something, heavy, unattractive”. The spa’s Internet ad pictured a slim good looking Asian woman, and the client felt cheated. In his comment he said, “I asked about another woman, like in the ad. The woman said, ‘Sorry, she is not here.’ So, I walked.” There was a rating system of zero to five stars. The Euphoria had only two.

The night was quiet. Traffic was light. The man thought she might have been heard. But the guy on the porch stood there, unmoving, still not ringing the doorbell. 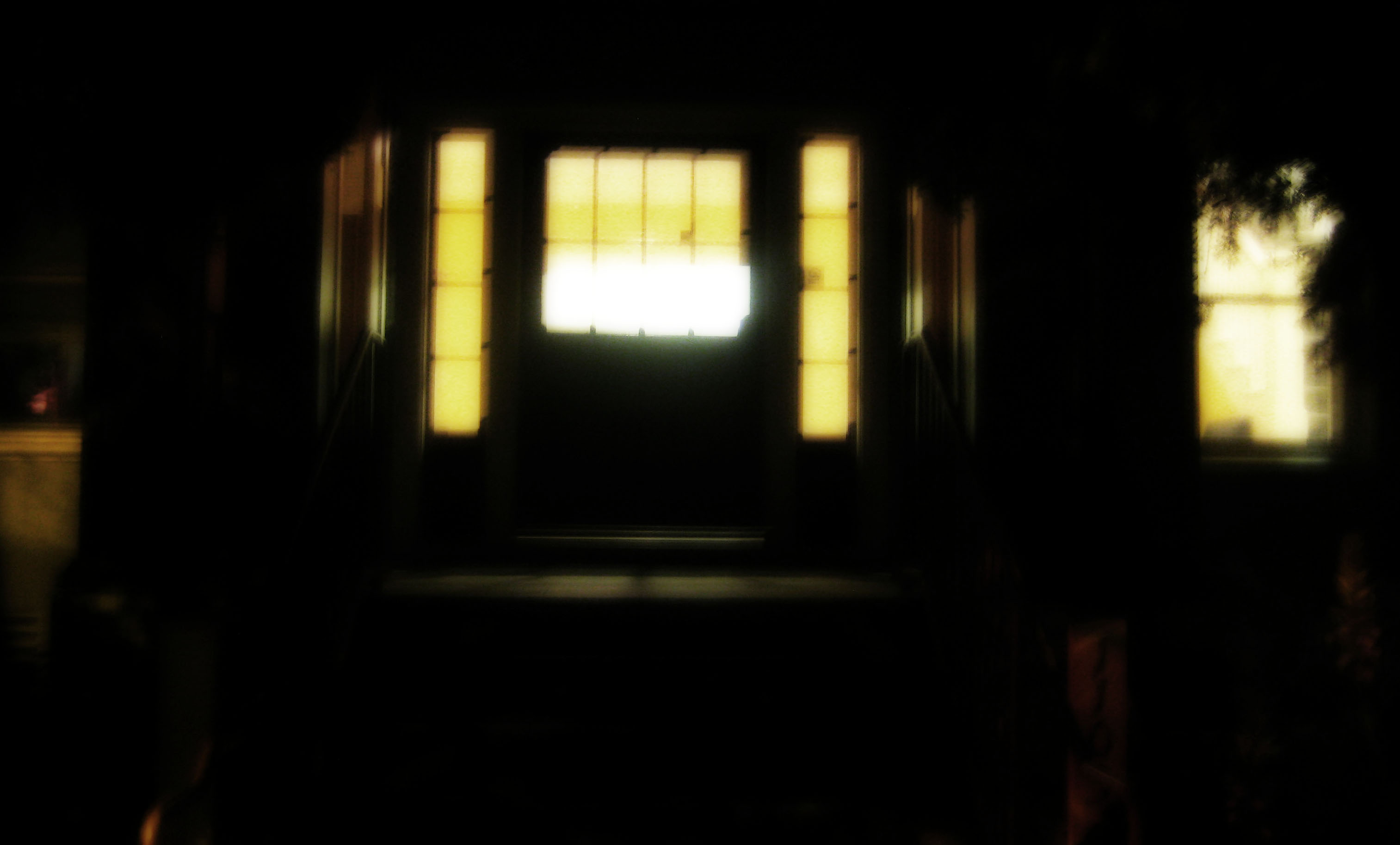 Behind them, staring out from the windows of the rehab’s front office, stood the night counselor wondering what the two of them were doing on his front steps. It was three hours into his shift. All the clients were asleep in their rooms, and his only concern was walking his rounds through the quiet building and making sure not to fall asleep in front of the TV. But now here were these people huddled, almost hiding on the front steps, and he was curious. Curious as to what they were doing and did they pose a threat?

The counselor was new at his job. Just a few years ago he’d been a hopeless drunk wandering the alleyways and sleeping under bushes. A series of arrests: public drunkenness, vagrancy, petty theft, and aggravated assault, had caused the courts to sentence him to treatment. He’d entered this very same rehab as a client and after his six-month commitment was up he’d stayed on as an employee. Recently he’d been promoted from janitor to night counselor, a position that afforded him a small amount of respect amongst the newer residents who thought anybody with more than twenty-four hours off the booze was a miracle. Now, every other Friday he’d take his meager paycheck down to the bank by the old railway station, the same bank he used to stand in front of and harass passersby for money, and he’d cash his check. And lately, when the night was quiet and he knew no one was going to notice, he’d slip out the front door, cross the street, and ring the Euphoria’s doorbell.

“There’s a guy staring at us,” says the man turning around and tugging at her sleeve.

“I gotta know what goes on in there,” she says, eyes fixed on the man across the street.

“Think maybe we should leave.”

“Are you fucking kidding?”

“There’s two things I hate. Being touched by complete strangers and going to strip clubs. This seems an icky combo of both.”

“I hardly think getting a hand job constitutes a massage.”

He finally gathers his nerve and presses the doorbell. A slight hum, almost just a vibration emanates from the door. He pushes against it with the palm of his hand and with a metallic click it opens inward. The interior light floods out onto the porch, illuminating him in a harsh yellow glow. He’s dressed in a hoodie and sagging oversized blue jeans, with large white running shoes on his feet. Was a time he thought himself a rapper, although he never actually rapped, except along with the CD player in his car. Now, married with child and another on the way, he was resigned to the fact he’d forever be just a construction worker and as far as life was concerned it was pretty much over until his kids were eighteen and he could breathe again.

Stepping inside he closes the door behind him. 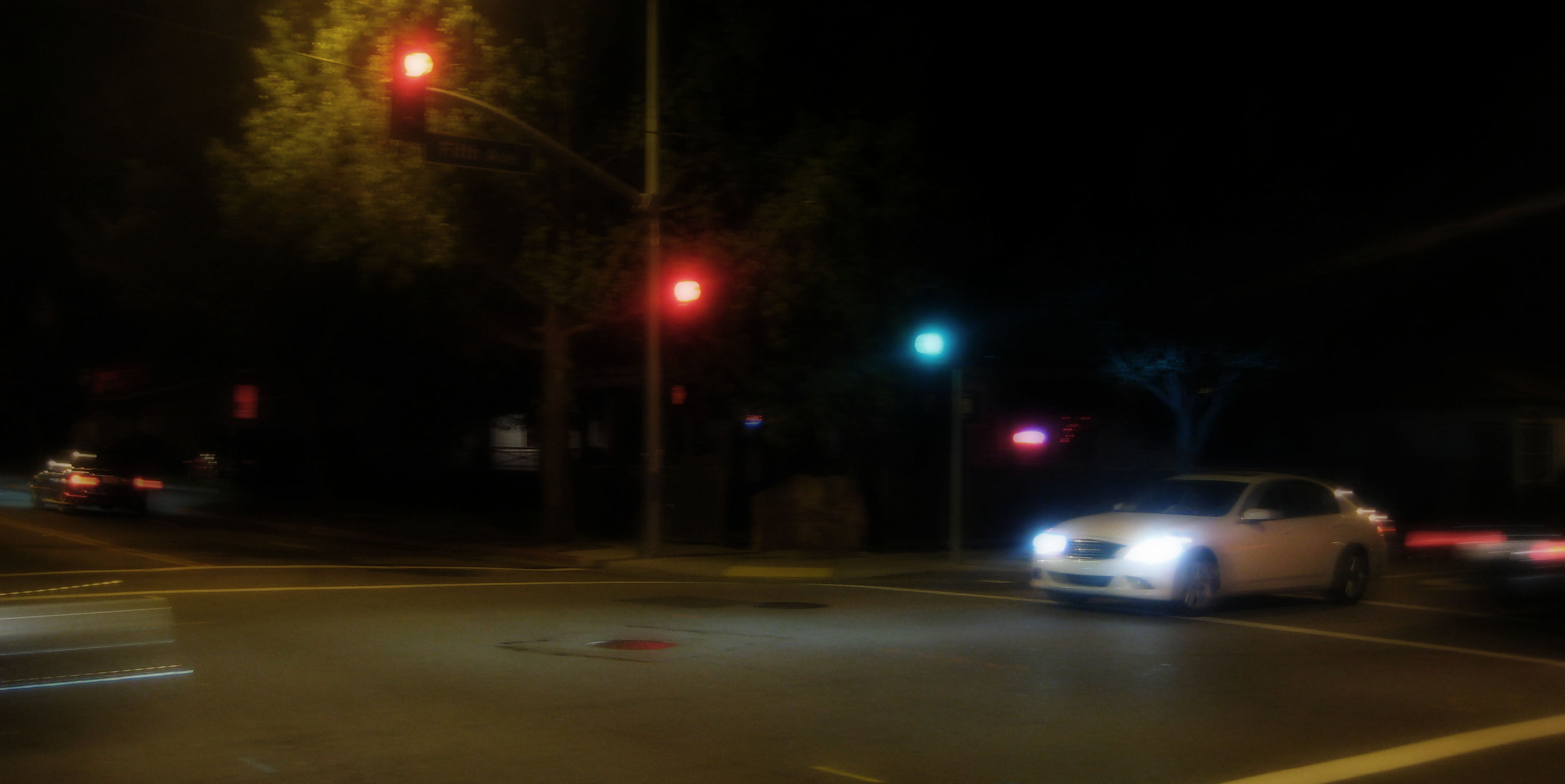 A car slowly passes on the street. The driver looks around, then speeds up. The man and the woman stand. She puts her arm around his shoulder and they kiss. With her hand in his they walk up the block, heading towards her home. The counselor opens the door, walks out onto the front steps, and lights a cigarette. The same car turns the corner again, slows down, then speeds up and drives away.