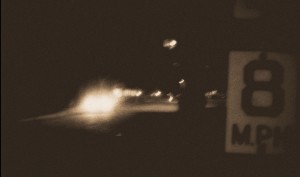 I walk onto campus against the flow of students and cars exiting the parking lot. I’m teaching tonight and Gayle, the woman I teach with is sick. So, it’s only me and I don’t want to be late. A cold wind is blowing. Shaking the palm trees and bushes, as the streetlights cast elongated shadows across the sidewalk. I walk quickly with my head down, leather jacket zipped, and a scarf around my neck. It’s sort of eerie. Reminding me of late fall or Halloween, but it’s only a full moon night in March.

There’s a young woman in a wheelchair stopped on a pathway by the arts building. When she checks her phone it illuminates her face and I notice she’s pretty. This isn’t the first time I’ve seen her. But it is the first time I’ve looked at her this close. She’s almost always here when I’m on my way to class, usually running past her because I’m late. No matter the weather she patiently waits, obviously for someone to come and get her. Seeing her pulls at my heart, because my sister uses a wheelchair, she has cerebral palsy, and when we were young I was the one that picked her up after school or other places she needed rides from. And having been an irresponsible drug addict and a total mess, I imagine the times my sister waited for me. Waiting on a cold night alone somewhere in the dark. And then the image goes haywire, into a horror film of what possibly happens to women in our society alone in dark places and a wave of shame and guilt washes over me. I can no longer look at the woman in the wheelchair. I turn my head and walk faster, my insides twisting. 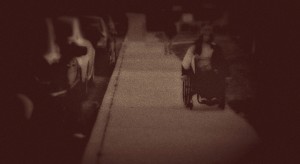 It’s two in the morning and I’m lying in bed, staring at the ceiling, a low level of depression is coming on and I’m trying not to go with it. As I close my eyes wishing sleep would overtake me, I drop into an ancient memory – I’m standing in a bank, my gun pointed at the teller as she fills a bag with money. She’s terrified and almost crying. I tell her to hurry up, and nervously glance over my shoulder. I’m so loaded on heroin I feel nothing for this woman. But as an observer, now, many years later, I’m detached from my then self and I see the fear I’m instilling. In a rush of emotions my eyes jolt back open, I sit up gasping for air, my heart pounding.

It was something that was said. A slight, a put down, nasty words, in reality I can’t even remember what it was. But either I said it or it was said to me, and I remember. I remember how it cut to the bone, and there was no way to take it back.

Such celebrations of guilt and shame are a mainstay of my psyche. I remember and relive horrific past events and basically torture myself with regret. I’m suddenly aware of how others felt, when before I was numb to their feelings.

I was telling my girlfriend Jennifer about the woman in the wheelchair and she asked, “Have you ever forgiven yourself?” And she might as well have inquired if I’d won the lottery for just how far removed that is from my reality. I’ve forgiven everyone in my life for all the bad shit ever done on to me. But, to forgive myself, seems impossible.

Although I work hard to try and not do more damage. I still hurt people. I still say stupid shit. I’m still me.

I’m not referring to the really lame stuff like the other day when sending Jennifer a explicit text regarding black panties and the curve of her hip reflecting in the mirror and I inadvertently, due to not wearing my reading glasses, sent it to the last person who’d texted me instead – a good friend that didn’t need to read my heartfelt yearnings of amour. That kind of shit is awkward, but funny and really, who cares? But, what I do mean is more like when I hurt people’s feelings even though I’ve told them the truth and they chose not to believe it, and then yeah, shit happens and I’m the bad guy, stuck with feeling blame. Or worse, I have a conscience, and I care about other people. I care to the point where it’s way past sympathy and empathy. I care to where it’s close to killing me. 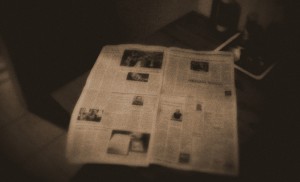 I come out of a coffee shop and there’s a bag lady passed out in a pool of piss and vomit and it fucking hurts to see this. I read the newspaper and some yahoo has gunned down a bunch of folks because he lost his job. A psycho’s torching cars and homes in Hollywood, a crazed veteran stabbing homeless men in San Diego, a deranged mentally ill mom drowns her baby, a cop brutally kills her ex-lover’s wife, and a GI in Afghanistan assassinates over a dozen civilians, many of them woman and children. It wears me down. I might not understand them. I might not like them, care for them, or want the best for them. But I know what it’s like to be trapped in a situation. I know what it’s like to be insane.

Class is over. The campus is deserted. I walk back out retracing the way I came in. The woman in the wheelchair is long gone. And I stare at the spot where she was. I wonder if she waited long. And then it hits me, how the hell do I know anyone was late picking her up? Why do I make up these scenarios? Why do I try to find a common thread of pain that just might not be true? 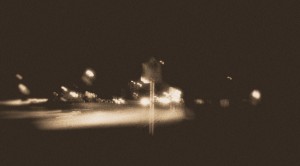 My car is off campus, parked under a streetlight. As I near I notice the shadow from a huge dent in the fender someone left after they pulled a hit and run and bashed my car. This happened last Sunday when it was parked in the parking lot of my building. Hitting my car couldn’t have been easy. It would’ve taken a lot of effort to drive into it. The driver had to cross the entire parking lot just to hit my car. And so now I’m thinking someone hates me. Someone did this on purpose and wants to hurt me. Fuck with me. Fuck with my car.

Yet, how do I know this? And why do I assume this instead of accepting it as a random accident that no one meant to do?

But who the fuck is ever going to forgive me.