He takes the coins and runs them through his fingers into the cup between his legs. Each one thuds when it hits the bottom. As the cup fills there’s a metallic splash every time another coin drops. “Dollar please, just one dollar. Come on people. I have needs too.” He’s sprawled on the sidewalk, his backpack and plastic bags stuffed behind him. He’s been panhandling for hours. Got enough for what he needs. But he wants more. 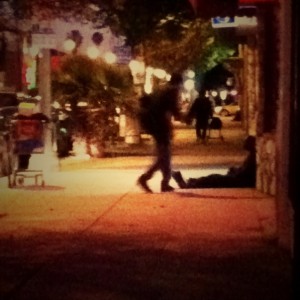 A woman stands waiting for the light. Dressed for the clubs, she has close to nothing on. She holds her small purse against her chest and eyes him with suspicion.

“Don’t you receive government benefits?” says the woman, edging as far away from his out-stretched legs as she can without being in the street.

“You’re in the wrong line of work.”

“This is just seasonal.”

She’s strutting her Jimmy Choo Eros pumps. Her long legs toned and tanned. Her black Manoush mini barely covering her coochie, but that’s how she wants it. That way all the guys be eyeing her. Because, you know, like her shoes Eros means love. And she’s all about that shit. As long as the guy has money and isn’t too big a douche. Because, you know, she’s not cheap. She’s not easy. She hits the gym everyday. Tanning booth twice a week. Shopping is her passion. Sure, she’s a Hollywood cliché. Could give a fuck. Bitch, my Kay Unger tank top cost more than your entire Forever 21 wardrobe.

Line at the Supper Club is long and around the block. Skeezers, skanks, and wannabes. But that don’t faze her. She walks with purpose, toe to heel, a runway pose, lean down, show cleavage.

Security pulls back the velvet rope.

A dork thinks he sees his chance, tries to walk in with her.

“Damn, them is some long ass legs.”

He’s got his “One Love” Bob Marley t-shirt on under his sharkskin sport coat. Electric blue hipster peg leg jeans, slightly sagging, held up by the regulation studded belt. Red Converse slipped on his feet. The finishing touch, a porkpie hat. He couldn’t decide retro, or urban, or wanting to look like he be jerkin, only that’d make him more a wigger than he actually is. But hell, he didn’t know which club he be hitting. Had to dress down somewhere middle of the road, and shit.

Now security was looking him over. Def not gonna let him in.

If only that long legged bitch had been cool.

Last week he taken out his cornrows, and cut his hair. Motherfuckers been giving him a hard time, like forever, and besides, he saw a photo of that fat old rock star Axel Rose from Guns N’ Roses. Bastard had blonde ass cornrows – what the fuck happened there? Since when did rockers do that shit?

Man, fuck this. Take it down to Boardner’s, get my dirty martini on.

He does what he thinks to be a cool stroll crossing the street. Pictures a crew of bad-ass gangsters on the prison yard, checking his gait, giving him the thumbs up. Más respect, baby, más respect. 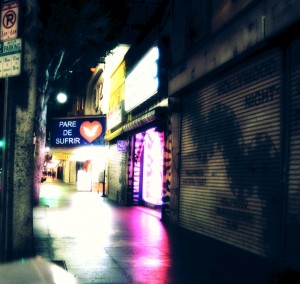 Up the block under the marquee of an old theater, now some kind of strange Latino Christian ministry, right there next to Skooby’s hotdogs, he sees a small crowd gather around an old man. A hot chick, she’s maybe eighteen, is making a fuss over the old coot. When dude hits the cement with his knees, she leans toward him. Her round ass pushing out her tight dress, as she bends down.

Like to hit that. But hell, there’s plenty bitches tonight. And he keeps walking.

She reaches out to her Popi. He’s trying to stand back up. A soft moan, crying. The siren is getting closer. Her heartbeat skips as he collapses. The women around them wail. “¡Mi Dios, it is not his time!” She kneels, holding his hand in hers. Feeling claustrophobic as more people come out of the building, a large crowd now by the entrance, Popi in the middle. “¡Él necesita a un doctor!” Half an hour ago he’d said he wasn’t feeling well. She’d asked if he wanted to go home. He loosened his tie and said no. She called the ambulance after he passed out the first time. Two men had brought him outside to get air. “Te amo, te amo.” Popi opens his eyes. Her profile against the full moon is the last thing he sees. 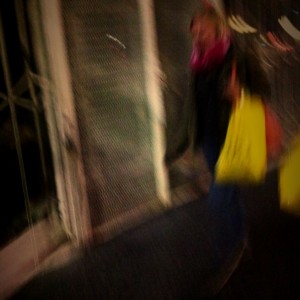 The ambulance skids to a stop at the curb. The woman, pushing a shopping cart dressed in torn filthy clothes, watches the paramedics run to the man laid flat out on his back. A beautiful young girl clutching his hand cries and the woman pushes her cart through the crowd, coming out the other side. She’s seen people die. She sees dead people almost every day. And that man, bless his soul, is dead. Poor girl should just get up and walk back in that church and pray for his eternal salvation. But really that’s not going to do anything. Shit. She’d been praying all her life, and look at her now. When a world lets this happen to a woman, a woman like me, there is no hope, there is no god. You grow old, society forgets you, and one day everything is gone.

At her feet, the Walk of Fame stars. She steps on Guy Lombardo, then around Gene Autry and over Al Jolson. But she doesn’t care. She’s too preoccupied. She has to find a place for the night. Some place safe. Lit up, yet out of the wind.

A man walks toward her. Dressed in black, leather jacket, blonde hair. She always notices him, walking the streets by himself, taking pictures, checking everyone out. He’s got his phone out, pointing it upward towards the moon in the sky. She glances at him, he doesn’t appear to see her. But he does.

He’s been cooped up in the apartment writing all day, staring at the computer for hours. His eyes can’t focus any more, and when that happens he pulls on his boots and coat, grabs his bag and goes for a walk. There’s always something happening. There’s always life on the Boulevard: street people, tourists, locals, cops, gangbangers, crazies, and freaks. He gets his exercise and breathes some air. Clears his head and thinks.

An old homeless woman pushing a shopping cart turns into an alley. The stench of her clothes and unwashed body linger in the air. An ambulance slowly drives away turning off its flashing red lights. There’s a young woman crying, as another woman, consoling and gentle, leads her by the arm to a waiting car. A buzzing noise, the accumulated conversations from the crowd in front of the club across the street, weaves through the steady hum of the passing cars.

He’s thinking about getting something to eat when he notices a man passed out, lying on the sidewalk. His backpack and bags are against the wall. In his hand an overturned plastic cup, a small pile of spilled coins beside him. 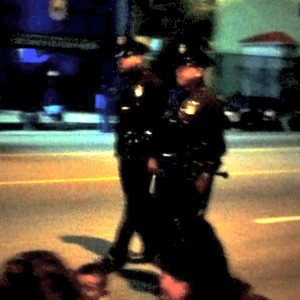 A cop steps out of a black and white patrol car. He walks over to the passed out man, his partner follows baton in hand. “Hey buddy, you can’t sleep here.”

He turns away from the police, back the way he’d came. Thinking a taco, falafel, maybe Chinese food. Above him the full moon is so bright it actually casts shadows.