Depressed For The Holidays

It’s a sunny warmish morning with blue skies and puffy cumulous clouds heading inland from the sea. Not exactly typical for Los Angeles in December, but after yesterday’s crazy Santa Ana winds the calm weather is a welcomed relief. As I head outside a woman walks by with her dog, pushing their way through piles of leaves covering the sidewalk. The streets, so full of fallen palm fronds, cars have to slow down and maneuver around them. I walk back to the building’s parking lot to check my convertible, make sure it wasn’t harpooned by some of last night’s flying debris. The winds had gotten so bad after midnight it sounded as if someone was pounding on my apartment’s walls. The large bushes by the front windows were crashing against the glass with such a fury I was worried they’d break through.

But thankfully everything’s all right, there’s no damage to my car. So I make my way up the street to walk the three blocks to get coffee. I pass neighbors out front of their houses raking leaves and uprighting overturned trashcans. A city truck is parked with its emergency light blinking, as two men chainsaw a small tree that’d been snapped in half and laying across the sidewalk.

With last night’s events playing through my mind and this sunny morning softening the edge off it, I’m so removed from any sense of the impending holidays that I’m momentarily taken back when I notice the Scientologists setting up their yearly Santa’s Village on Hollywood Blvd., which when you think about it is wrong on so many levels. 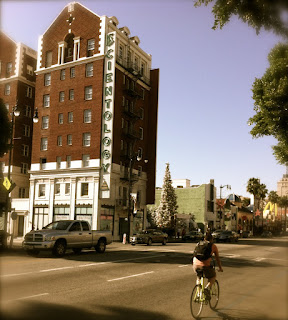 Strange, but they do it every year, and when they’re all done families will line up, the kids sitting on Santa’s lap for a donation. Do these people ever think where that money is going? How absurd it is that the Scientologists celebrate Christmas – they claim we’re infested by the spirits of frozen aliens that were destroyed by hydrogen bombs dropped on them by the evil galactic ruler Xenu 75 million years ago, and then those spirits were taken to…. Ahhh, yeah whatever, at least that’s what their deceased leader L. Ron Hubbard said. So maybe Santa’s an alien? Maybe he’s a Scientologist? Juliette Lewis is. I may never be able to watch Natural Born Killers again.

But really, who cares what the Scientologists do? It maybe another beautiful Southern California morning but the world is falling apart. Literally at the seams, as earthquakes happen in regions that have never had them, drought as well as flooding is rampant, and major corporations are destroying whatever is left, desperately trying to suck the last ounce of profit out of the ground before it all dries up. And as if all that wasn’t enough, governments everywhere are imploding from corruption, mismanagement, and incompetence.

Fortunately, it appears that people have had enough. Occupy Wall Street and all the other similar movements are putting a face and voice to the dissatisfaction, standing up to corporate greed and the raping of America’s constitution. Some workers are fighting back against arrogant government and private sector attempts to return them all to the non-union oppression of pre-industrial revolution. And all across the globe people are marching in the streets expressing frustration over political mangling of their rights, representation, and economies.

Yet, it isn’t all rosy and cheerfully positive, as meanwhile shoppers stand in line all night outside Wal-Mart so that they can attack one another with pepper spray in the hopes of beating back the other desperate hordes and obtaining cheap sale items for Black Friday. Obama’s installing a “prolonged detention” law into the “new” Patriot Act and erecting legal shenanigans that supposedly fall under “the rule of law” to justify it. Now anyone deemed a threat can be locked up indefinitely without a trial. And if the Occupy movement has done nothing else, it has at least proved positive evidence that our once courageous news organizations are clearly under government’s thumb, and in the pocket of the rich.

Bombarded by all this and the consequent responding thoughts I get a tad depressed, and a bit grumpy. Leaving the apartment to get some fresh air and stop stressing was my intention, as well as to get some caffeine flowing through the system. 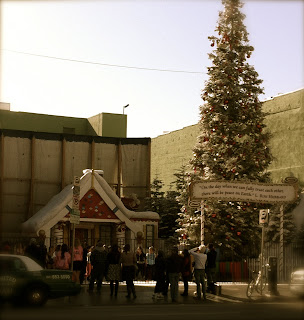 Latte in hand, I sit in my local coffee shop, across the street from the Scientologists, and open today’s LA Times. There’s absolutely nothing about the imminent police assault of Occupy LA, nor is there even mention of Obama’s speech of three days ago. It’s as if none of that’s even happening and instead there’s Pamela Anderson interviewed down the street at the Hollywood post office for her commemorative “PETA Vegetarian” stamp. Under a picture of her smiling, holding an enlarged reproduction of the stamp, and conveniently framing her ample breasts, it reads: “She wore a smoky blue-gray sleeveless dress that reached mid-thigh and revealed cleavage and lacy, peach bra.” I’m thinking, “This is news?”

Across the store at the counter for the half and half and sugar a homeless woman silently waves her hands over her paper cup and moves in almost a dance, reminding me of some form of Tai Chi. Only she’s more spastic and a bit trance like, no doubt the electrodes in her brain burned out from too much meth, or years of alcohol. When she turns I glimpse a pushcart full of her tattered belongings shoved up and hidden in the corner.

“Ma’am?” says the young kid that works behind the counter. “You can’t be here all day. Other people need the condiments.”

She stops weaving and stares at him. I put down my paper and watch. The kid looks tired, and a slightly angry. The homeless woman hesitates, it appears she’s deciding how to react. I feel for her, but I’ve seen her around. She’s crazy as fuck, and usually is screaming incoherently in the street.

“Callin’ the police,” says the kid.

But he’s not reaching for the phone. And she knows it. And then I’m thinking this probably happens everyday between them.

“I need money,” says the woman.

“Get a job,” snorts the kid, a look of contempt spreading across his face.

“Want a new dress,” she says and then starts dancing again, weaving in and out to an unknown beat that’s decidedly opposite to the horrid in-store pop music being played. “Like to live in a house, have a cat, eat strawberries.”

The kid stops wiping the counter and stares at her, this time without malice. He looks sad, and slightly pained. “How bout a refill before you leave?” 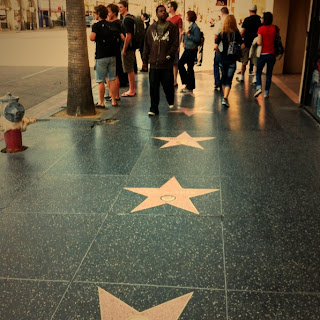 I go back to reading my newspaper. Pamela is still there, and for some reason I start on the article again. “One woman in a ragged black T-shirt and shorts wedged her way into the crowd of cameras, burning cigarette in hand, and asked Anderson if she could possibly spare a dollar or any change. ‘You look beautiful,’ she said, when Anderson apologized for not having anything on her.”

It’s pathetic being depressed for the holidays. It’s like every cliché that’s ever been written. And really what the hell do I have to be depressed about? I’m not homeless, mentally deranged, stuck working a shit job, or brainwashed in a religious cult. I’ve a chemical imbalance that slips into gear every once in a while, but I know the difference between sadness, stress, and depression.

The world is falling apart. The economy is going to hell. It’s all going to get worse, before it gets better – if it ever does.