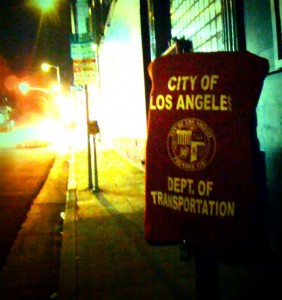 Old woman in wheelchair, out front of a liquor store, squinting in the glare of the overhead light, smokes a cigarette and panhandles for change. 11:38PM and it’s still hot, the day having been a scorcher. Two kids walk past, laughing, and ignoring her pleas. One of them drops his empty coke can on the pavement. Old woman shakes her head, rolls across the stained concrete, and leans down to pick it up, the cigarette dangling from the corner of her mouth. A plastic bag caught in a breeze wraps itself around the spokes of her wheel. Mumbling to herself she momentarily lets loose the can and attempts to free it. The shadow from her chair makes it hard for her to see and it takes a while, but when it’s finally untangled she leans back, upright, and closes her eyes.

Her hand rests possessively on a half pint of vodka. A pack of cigarettes shoved into her bra, a bag of empty bottles and aluminum cans hangs off the back of the chair – other than that her only possessions are the clothes she’s wearing.

Opening her eyes she sees me coming.

“What you buyin in the store?”

“Who says I’m buying anything?”

“Just walkin past is all I’m doin.”

“Seems someone like you should be doin more with his life.”

A car rolls by slow, I can see inside, make eye contact as they pass. A tattooed hipster, his girl driving, he nods and I return it with one of my own.

“Know ’em?” asks the old woman in the wheelchair.

“Sure ask lot of questions.”

“Be askin less if ya’d jus gimme a dollar.”

A police helicopter drones across the night sky. Its spotlight momentarily lighting up the storefront and sidewalk beneath my feet. The heavy staccato beat of its rotating blades deafening and the old woman covers her ears. Three squad cars careen past in the street, their lights flashing, sirens on. Although with the helicopter directly overhead I can barely hear them.

Somewhere down the block appears to be where it’s happening. More cops arriving from the other direction, sirens in the distance getting closer. The helicopter hovers, making circles in the sky, its light stuck on the intersection, illuminating the flashing red lights and the police crouching behind their black and whites, un-holstering their guns.

“Lotta bother for nothin when is so goddamn hot,” says the old woman.

Suddenly two women are running towards us out of the shadows from across the street. High heels, mini skirts, one blonde, one black, both with blank expressions, like they were coming from the nightclub and got caught in the helicopter spotlight’s glare. Except they look a little rougher than that. Like they’re used to dealing with police and running for a different reason.

I look up at the helicopter. Watch as it arcs in a holding pattern. Think about turning around, heading off in the opposite direction from the commotion down the block, except that’s the quickest way to my apartment.

Blonde hooker goes inside the liquor store. The other leans against a parking meter and lifts her foot to adjust her shoe. Glancing up she sees me staring, straightens her leg.

“Try walkin all night in these. My feets killin me.”

“Ya act like all you do is walk,” says the old woman. “Surprised yo knees aven’t given out.”

“Bitch, mind yo own business an shut up.”

Black girl lights a cigarette, blows smoke upwards. The gesture as if she was inside near someone who didn’t want smoke in their face, but here, outside on the street, its unneeded and strange.

“Wanna date?” she says to me, flashing a thousand dollar smile.

“That’s what they’re callin it these days?”

“Who the fuck you think you is white boy?”

“Dude not dating you, that’s who.”

The old woman snorts a laugh and I turn my back to watch the police.

“Fuck y’all,” says the hooker stamping out her cigarette before going inside the store.

“That’s right, save yo money. Sides it betta spent jus givin me that dollar,” says the old woman.

“Wasn’t always in this wheelchair,” she says. “Used be I turn guys heads.”

I take a real good look at the old woman and find it hard to see that possibility. But then people age, they change, and out on the street one of the first things to go are a person’s looks. Maybe that was thirty years ago, or more, and besides the two women in the liquor store aren’t exactly beauties and still I was staring at one of their legs. 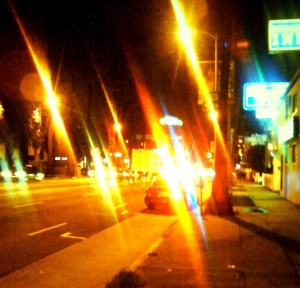 Down the block the helicopter revs and pulls itself up into the night sky, turning off its spotlight and heading towards West Hollywood. A few of the cop cars are pulling away. An ambulance arrives and I’m thinking it safe to make my way through the melee to get home.

“Callin it a night?”

“I thinks it’s night, whether I call it or not,” I say to the old woman in the wheelchair.

“Always been a smartass?”

I hesitate, wondering if I’ve bottled water at home, or should I pick some up at the store. Then ultimately deciding I’ve some waiting for me, I turn to leave.

“When ya get round feelin generous with yo dollars, don’t forget me.”

“How could I possibly forget you?”