Anarchy At The Circle K 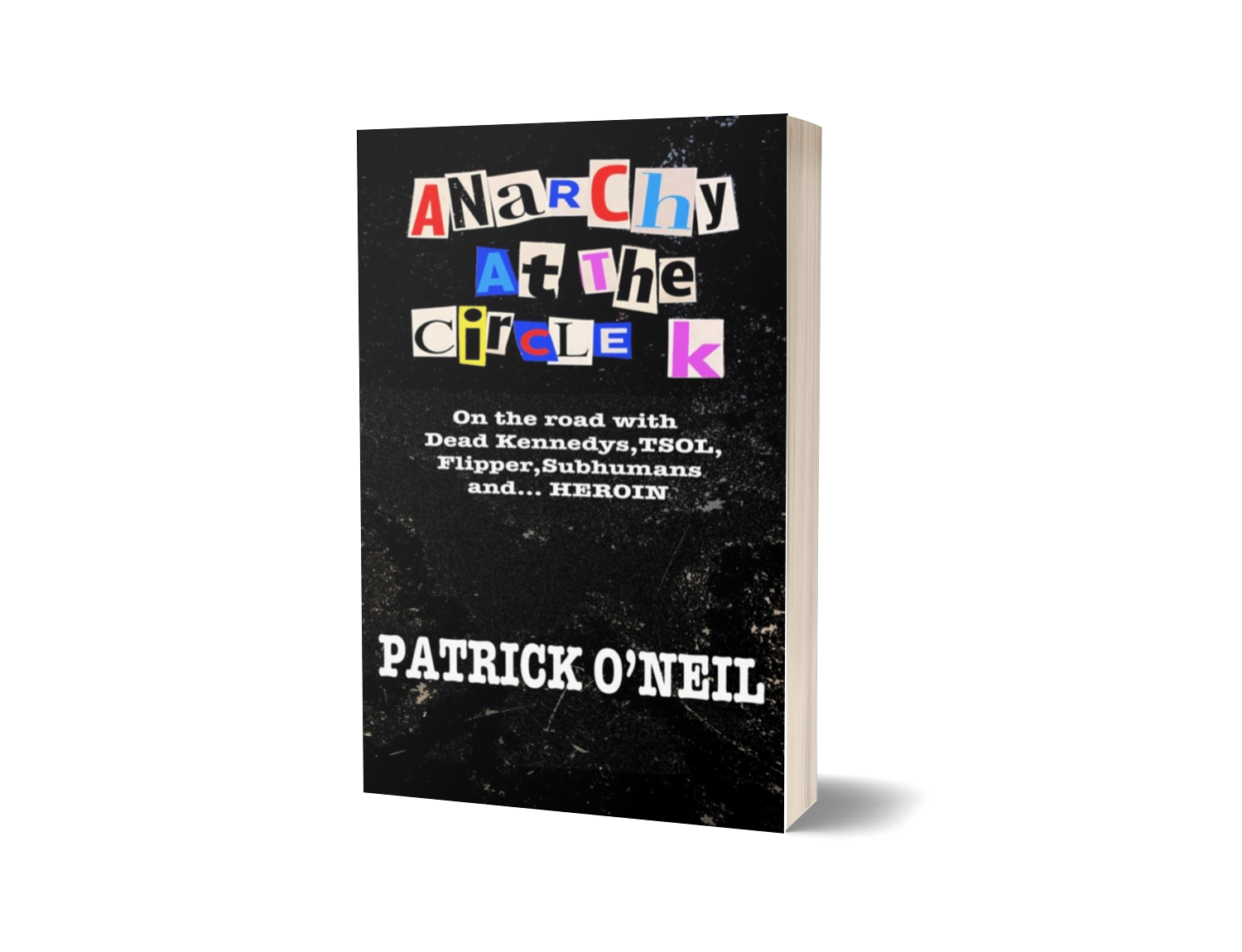 My new memoir, Anarchy At The Circle K, is out now on Punk Hostage Press.

Anarchy At The Circle K is literally a punk tour-de-force. An in your face gut-wrenching, and at times humorous, tale of Patrick O’Neil’s stint as a roadie, road manager, and drug addict during punk’s heyday of the 1980’s. Crisscrossing the highways of America, on tour with such influential punk bands as Dead Kennedys, TSOL, Flipper, and Subhumans. O’Neil writes a brutally honest and no holds barred memoir depicting the sleepless nights behind the wheel, never-ending string of decrepit night clubs, a plethora of ruthless promoters, depressing dressing rooms, copious amounts of cheap beer, clandestine drug buys, riotous crowds, intense violence, inadvertent OD’s, and seedy motel one night stands. This book is an insider’s look at life on the road from back in the day and you’re along for the ride.

“Patrick O’Neil brilliantly describes the insanity of touring with a punk band in the 80s. Like his last book, Gun Needle Spoon, Anarchy at the Circle K is a page-turner, except that I had to keep stopping to catch my breath. How does he remember it so well when he was out of his skull? I can barely recall, and I was (mostly) sober. For me this book was like PTSD therapy, with forgotten incidents brought back by O’Neil’s bemused, smirking prose.”

“Patrick is an authentic storyteller, and I consider him one of my oldest friends. He is and was the real deal, funny, friendly, smart, and tough. Few could tell this story, let alone live it and survive. His recall of all the people and places… is nothing short of miraculous as most of us who were there struggle to remember in such color and texture. Anarchy at the Circle K brought me back to a wild, free, and reckless time when we toured relentlessly and when anything seemed possible. We were a band, a gang, and a family always headed to the next town. Chris Grayson and Patrick were our crew. We inherited them from Dead Kennedys. Chris the soundman has passed (RIP), Patrick continues on and I think he still has a lot to say.”

“Anarchy at the Circle K is an insightful view that you don’t get or think about when you’re in the band—all the personnel, bands, girls, drugs, promoters, and venues. The rise and fall, the WILL to take it all, and do what ever it takes to get the band and gear to the next gig, and score the D… Patrick O’Neil, the man is a juggernaut. Thanks for not sugarcoating the shit!”

Anarchy at the Circle K is a bittersweet series of adventures brilliantly described by ‘our hero’ in the role of roadie slash drug and sex fiend during punk’s hard-core era. Patrick O’Neil survives to tell of his decent into the dregs of bottomless addiction and subsequent redemption in this true-life enjoyable often uncomfortable, hilarious, and highly recommended read.

A tour de force of the punk rock scene written by a man who lived it, Anarchy at the Circle K is a wild ride from page one to the last. A book that takes off fast and never lets up, crisscrossing the country in an insane, violent and tumultuous tour of drugs, booze, sex, and rock and roll. With a passion for the music and the dangers that came with it, Patrick O’Neil has written a remarkable, first hand account of life on the road with some of America’s greatest punk rock bands. Ex-roadie, ex-heroin addict, ex-con, O’Neil is hard and tough and calls it like he sees it, never pulling his punches, a fearless truth-teller who’s earned his place among the very best of L.A.’s grittiest writers. What a fine and powerful book.

Patrick O’Neil’s Anarchy at the Circle K takes us all over Reagan-era America, from one shithole venue to the next, capturing the grueling grind of DIY punk tours, the endless, desperate quest for drugs, and countless run-ins with the law. Written at the relentless pace of a good hardcore show, the book is equal parts thrilling, raw, insane and surprisingly touching. Dead Kennedys, Flipper, Subhumans, and TSOL figure prominently in the narrative but, ultimately, it’s O’Neil’s unique perspective from the eye of the punk cultural hurricane that makes the book impossible to put down.

“You Ever Go By The Name H. R. Giger?”: Inside The Dead Kennedys’ ‘Frankenchrist’ Album Art Raid, Decibel Magazine, February (2022)

Anarchy At The Circle K Keys To Recovery Newspaper, August (2022)

“Before He Became an Author, Patrick O’Neil was a Bank robber,” The Drunkalogues, September (2022)