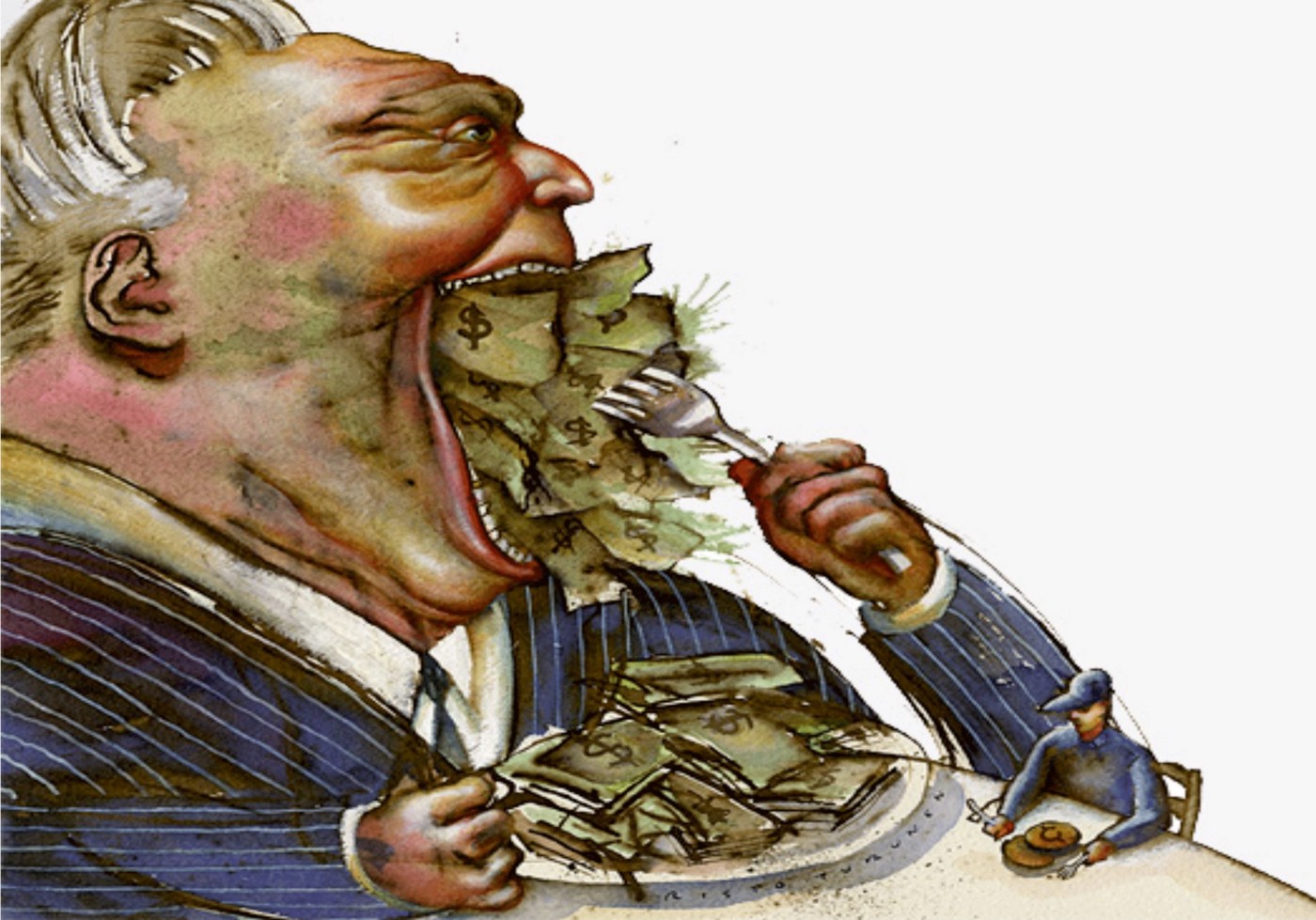 Inflation is here and it’s kicking ass. Prices rose 7.5% in January alone. The only other time in recent history that inflation hit this high was back in 1982. Reagan had been in office for a year and totally fucked the economy with his “voodoo economics.” Yet even in that “economic downturn” corporate America still reaped nearly $2.5 billion in profits.

Now here we are again in 2022 and during this “unprecedented” time of inflation profits for Standard and Poor’s top 500 companies rose nearly 50% and are poised to rise even further in 2023. But wait a minute, you may be asking… If they are making such record earnings then why is inflation so off the hook? Shouldn’t corporate America take some of the weight off the economy and allow for less profit for the good of the economy? Ha! My friend what are you some kind of communist? America is unapologetically capitalist. What the corporations want, they get, and many of them with the help of our tax dollars.

Just take a look at the oil industry. Besides the fact that they pay significantly lower taxes due to tax codes that allow them to defer and avoid federal income tax, they are also subsidized with our tax dollars, to the tune of $20.5 billion annually (and that’s not even taking in to consideration the astronomical clean up costs for all their environmental damage). Yet these companies are worth somewhere close to $2.1 trillion. And their CEOs, like Chevron’s John Watson, make $24 million a year.

America consumes 18.2 million barrels of petroleum a day. And U.S. refineries produce about 18.3 million barrels per day. Yet right now gas prices are through the roof. Why? The pat answer is that Russia’s invasion of Ukraine has disrupted the flow and Russia is the biggest exporter of oil in the world…. yeah, except only 20% of Russian oil makes it to America. So that’s just a load of shit. The real reason is that gas is priced on global commodity markets – so the loss of Russian oil affects prices around the world, no matter where it is used. And America’s oil companies, subsidize by our tax dollars, are making up their “global losses” by raising prices here in America. Our refineries put out enough oil for what we consume, and if everyone (oil companies included) tightened their belts and took less of a profit, we’d be okay. But that’s not how capitalism works here in the good old U. S. of A.

Oil companies collectively pull in a $174 billion annually. Last year they paid their shareholders a record $36.5 billion. So it’s suffice to say that things are very good in their neck of the woods and they don’t want it to change. In fact they want their profits to get even bigger. And the best way to do that is to feign a gas shortage and gouge the working class. There’s a word for this and it’s profiteering.

Now here comes the twist… Trump and his cronies sold off America’s public lands to expand drilling rights and the oil companies’ production output rose and not only met America’s demand for oil. They became a major exporter as well. But that was all threatened when the Democrats regained power. In fact Biden’s proposed spending bill allocated $550 billion to alternative energy and climate programs that did not included the oil companies. There was even grumbling of taking away their subsided tax breaks.

So what did the oil companies do? Politicize their money and donate to the party that favors their profiteering. Their “political action committees” are bankrolling the members of congress that supported the insurrection and continue to promote the big lie. Exxon and Chevron have donated millions to the Republican cause (and several turncoat Democrats). Yet that’s all the long game of investing in the next group in power. The short game is eroding the power the current administration has and what better way to damn the current government than to keep prices high and fan the flames of inflation? The American public is so easily led astray and looking to blame someone for the ever-rising cost of living. Mid-term elections are here. And the oil companies’ opportunist price gouging has two-fold benefit—keep the profits rolling in and add to current inflation in order to make the Democrats look bad. It’s like a win, win, for capitalist moneygrubbers that operate above the law.

Feel like taking a trip this summer? Think again. Because the airlines that your tax dollars bailed out during the pandemic to the tune of $54 billion, are poised to pass along 100% of their upcoming fuel cost increase. Even though American Airlines stated, “demand is tracking ahead of expectations, returning to 70% of 2019 levels.” And Southwest Airlines’ “total operating revenues [have] increased 74.5 percent, year-over-year, to $15.8 billion, but decreased 29.6 percent compared with 2019 due to the impact of the pandemic.” And here in lies the rub. If a corporation isn’t making more profit than the previous year, they cry afoul, and act like they’re losing money, when in fact they just aren’t making the money they “projected” they should, and the amount their shareholders expect and demand. And who do you think has to pacify their greed? Yup. You guessed it. We The People of United States of America.

The price of oil dropped last week. Today I paid $6.59 a gallon. Do the math. We’re getting fucked and the corporations are manipulating the American economy. But they want more. They want total control. And their self-manufactured inflation is going to give it to them in the mid-term elections.