You Gotta Be In It To Win It 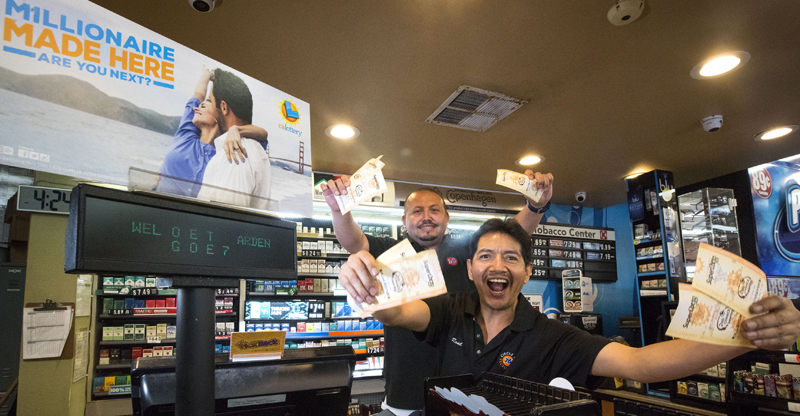 “I’ll take a Mega-Million, a Powerball, and a Super-Lotto.”

“You feeling lucky?” The 7-Eleven clerk sizes me up as he adjusts the impulse buys displayed along the front counter.

“Nope, just tryin’ to do my part keeping the American people downtrodden and broke.”

“Huh? You some kinda socialist?”

This is a new thing, buying lottery tickets. And by new I mean I started buying them last week. I bought three tickets, known as quick picks, where they randomly chose the numbers for me. I know it’s a losing proposition. The odds are worse than Vegas—one in 300 million to be exact—yet I can’t help but dream of winning big. No more worrying about bills, or money, or that dreaded, “what the future holds.”

After all that is the lotto’s real lure. True “fuck you” money.  Not the $1,400 stimulus checks that Republicans think we’re all retiring on.  Or a bi-monthly salary that disappears the minute it hits my bank account. And worse, the prospect of working until I’m old and feeble and can barely stand—which the way things are going is looking like sometime next year.

Gimmie, Gimmie, I wanna be rich, yo.

One percent of America’s population owns nearly 40% of the wealth. Further enforcing the socioeconomics of the “haves and the have-nots.” Meanwhile every day visions of income inequality are shoved in our faces with the news media reporting on the disparities of CEO’s to workers salaries and the new wave of gentry and upper bracket earners flaunting their fortunes. In turn the public idolizes rich self-serving idiots like Trump (besides his unconcealed racism that’s one of the main reasons they elected his ignorant ass), and talentless people are celebrities only because they have a shit ton of money. Name recognition is a brand. Wealth is envied. The masses fantasize and dream.

How else could you get people to vote against themselves excerpt by allowing them to think they too have a chance of becoming filthy rich, when in fact they don’t and never will. If you’re living in a doublewide with a popcorn ceiling then you really shouldn’t be worrying about inheritance tax. But yeah, dream on, vote red sucker.

And even though I know it’s all idol worship hyperbole bordering on obsessive hysteria that shit can still get to me. Especially in a city like Los Angeles where opulent wealth is constantly on display and youth is a seven-figure commodity. That feeling of desire and envy when I park my twenty-year-old Volkswagen next to brand new Maseratis, Benzes, and Bugattis in the grocery store parking lot. I scan the real estate listings and get depressed because the average two-bedroom house is selling for $1.5 million. I watch rents skyrocket to unaffordable and my neighborhood’s demographic flip into, “hey, you can’t live here anymore.”

This type of covetous yearning isn’t something that I’m very proud of. It brings out a shallow materialistic part of me that I really don’t want to relate to—let alone admit. I’d like to think I value the creative beauty that life has to offer over amassing wealth. Then I think of the future and visions of homelessness and living in a tent on a grungy urban sidewalk invade my brain and the fear of uncertainty screams out in pain.

Now Covid has added another layer of anxiety and instability. Over the last year of quarantines and shutdowns my work hours had been cut way back and my salary reduced to help the businesses I work for offset their losses. Then I got hurt and have been on disability at one third of my former reduced salary (hey, I’m not complaining, I’m grateful there’s any money coming in at all). Yet being that one more step removed from everything and I’m on the sidelines watching everyone else continue on. Which makes it hard to see the good all around me. I’m having difficulty being happy for other people’s successes (another trait I’m not thrilled to have acquired) and another level of envy rears its ugly head. I see other writers with books coming out and lament on why not me. Friends announcing that they’re receiving grants, professorships, publications, signing contracts, scholarships, new jobs, and buying houses causes me to feel stagnant. I’ve become irrelevant (not that I probably ever was relevant), and huge swaths of a successful life seem to be passing me by.

The 7-Eleven looks exactly the same. In fact the same clerk is wiping down the counter in much the same manner as last time I was here. Behind him rows of stinky hotdogs continue rotating in their own grease, and scary pizza slices stiffen up inside their plexiglass shielded display cases.

“So you wanna play again, right?”

“Don’t know. Feels like… you know… throwing money away.”

“How ‘bout a scratcher then? Gotta nice Lucky Green one for you Irish folk.”

“How ‘bout I just clog my arteries munching down a pile of your taquitos and pray for a sudden coronary to take me away?”

“Always great to see you. Really brightens up my day.”

“What am I supposed to do here? It just all feels so futile.”

“Hey you could play the lotto!”

“Come on man, you gotta play. Covid ruined my sales. The commission cut back on jackpots. No one’s playin’. I’m dying here.”

“What you make selling lotto?”

“Five percent. You win? I get hella big kickback. Yo come on man, I got kids.”

“Fuck… I’ll take a Mega-Million, a Powerball, a Super-Lotto… but I ain’t buying none of those nasty mini tacos or a Big Gulp.”

Lotto, another system for “the man” keeping all of us down.