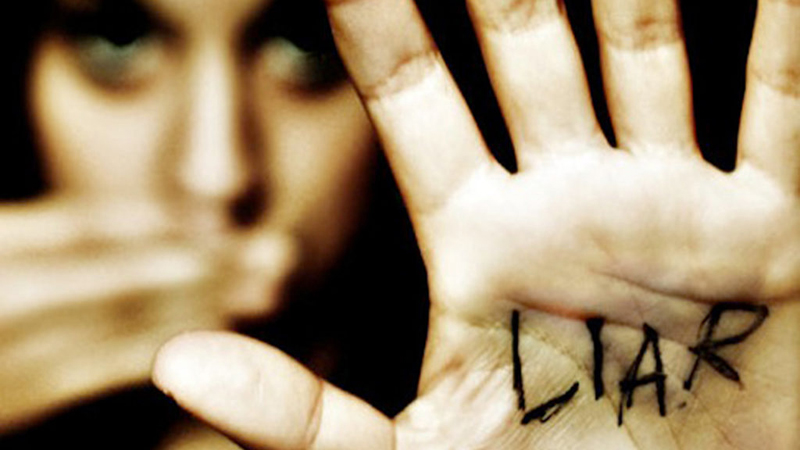 The local Florida news reporter was wandering the sparsely filled hallways of the Conservative Political Action Conference gleaning the right-wing attendees for sound bites and homespun southern “wisdom.” A large splotchy pink and white-faced woman decked out in red MAGA gear was angrily lamenting on the “stolen” election and the unfairness of “the radical left’s cancel culture.” When the subject of Twitter entered the conversation she twisted her face into an expression of shock, “Can you imagine facts checkin’ the president? He’s the gol’ durn president!”

In his four years masquerading as America’s Commander in Chief Trump publicly lied 30,573 times—that averages out to 20 times a day—everyday. In the meantime the American public grew accustomed to his lies, some obviously believing them, and the collective response was to become calloused to disinformation. Now it’s not like politicians haven’t been lying like… well, forever. But the level of bullshit during the Trump era rose to such gigantic proportions that it became the norm and it appears that we all just got used to it, or maybe found some sort of acceptance. “Okay, so was that last one totally fabricated, an outright lie, purposely mean-spirited, or just him pointing the finger at someone else claiming they’re doing what he’s doing?”

Yet even with Trump out of the White House it still seems like lying has become the de facto American way. If you say something, even without proof, it simply becomes fact in the public eye. Lying has become as American as apple pie and racism.

Now before all you terminally compassionate folks get all self-righteous and pull out the “who among us hasn’t lied” card. I’ll save you the effort and straight-out admit that yeah, I’m a goddamn liar. I’ll say shit like I’m busy when I’m not. I’ll make excuses as to why I can’t do something when I know damn well I could. I’ll avoid telling you your truth because I don’t feel like it’s my job, don’t want to tell you what to do, and co-dependently don’t want to hurt your feelings.

For the majority of my adult life I manipulated and weaseled my way around the truth to suit me, my needs, wants, and desires. I’ve outright robbed banks, pleaded “not guilty” in court, and kept a straight face while the words coming out of my mouth were complete and utter bullshit. I was the stereotypical junkie that would steal your wallet and then help you try and find it. My entire existence was a deception and in turn reality became so threatening I would lie for the sake of lying even though I could have been honest.

When I finally got clean off drugs I tried to change all that. They say we’re as sick as our secrets and that we’re lying to ourselves. And because of all that I’ve made concerted efforts to be as genuine as possible, walk the walk, talk the talk, have integrity, and above all be straightforward, trustworthy, and sincere. But then in recovery I’ve told people they were going to be okay, when I knew they weren’t. I’ve said I cared when in fact I couldn’t care any less, and I’ve done the exact opposite as my heart was breaking from caring too much.

Obviously I’m a walking talking contradiction and even though I strive to maintain a program of rigorous honesty I have slips up, I stumble into old behavior, I get scared, judgmental, resentful, or maybe even a tad self-righteous. Sometimes I don’t want you to see who I really am. Other times I’m in fear, or stressed out, or maybe it’s that old shame and guilt coming around again.

“If you tell a big enough lie and tell it frequently enough, it will be believed.” —Adolf Hitler

But nothing I’ve said or done compares to the level of lies that have become today’s standard modus operandi (plus I ain’t no elected official running a goddamn country).  I don’t think I’ve ever heard and seen so many lies, mistruths, disinformation, falsehoods, manipulations, fabrications, distortions, and outright hoodwinking bullshit as I have in the last few years. The level of dishonesty in today’s society is staggering. It has become routine to deny reality by making up whatever alternative you want instead of accepting what is actually the truth.

People just lie like it ain’t no thing. Their crazy-ass conspiracy theories manipulate gullible dumbasses into committing crimes and reacting with violence. The news media highlights liars giving them a platform to perpetuate more deceit because spectacle sells. Bogus websites post whatever they want and there are no consequences as this all falls under the First Amendment freedom of speech.  And according to the laws of the land outright bullshit and deliberately misleading lies will still receive the same full protection as the people’s right to protest and “petition their government.”

“You’re a no good heartbreaker, you’re a liar, and you’re a cheat. I don’t know why I let you do these things to me.” — Aretha Franklin

Case in point, Jacob Chansley, aka the “QAnon Shaman” — that crazed insurrectionist who came to fame during the January 6th assault on the US Capitol building. His painted red, white, and blue face and a horned fur helmet was just the kind of inflammatory imagery the news media loves. Numerous videos showed Chansley on the Senate floor during the insurrection, bare-chested, tattooed, smiling, and carrying a spear. He shouted, chanted, and left a hand scrawled note on Vice President Pence’s desk, IT’ᔕ OᑎᒪY ᗩ ᗰᗩTTEᖇ Oᖴ TIᗰE, ᒍᑌᔕTIᑕE Iᔕ ᑕOᗰIᑎG

Three days later he was arrested and charged with two felonies and four misdemeanors, including civil disorder, interfering with a law officer, violent entry, and disorderly conduct. And he’s now looking at up to 20 years in federal prison.

Sucks when you get caught.

“I know some of you are afraid to listen to the truth — you have been raised on fear and lies. But I am going to preach to you the truth until you are free of that fear.” — Malcolm X