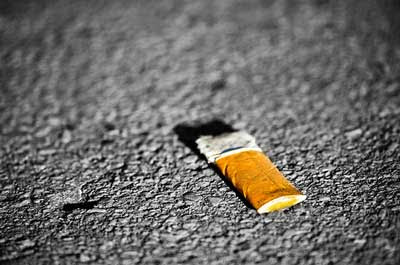 I was in early recovery and wasn’t the healthiest person. I had just gotten released from prison on parole and as a three strikes candidate–an ex-con with two previous felonies whose next conviction would put him away for life–I should have been more vigilant keeping my nose clean. But I was also a drug addict and had gotten myself hooked again despite the consequences. Strung out and avoiding my parole officer my days were numbered. So instead of just saying “fuck it” like I usually did and losing everything, I’d gotten myself into rehab and here I was, 20 days clean off drugs, again, and a bundle of nerves.

My new rehab didn’t take anyone who was detoxing. So being the good drug addict that I was, I lied and said I had 20 days clean. Worse, it was a real rehab, not rich kid rehab; I had daily chores, and dope sick and barely able to function I was required to attend groups, clean the building, and work in the kitchen.

Naturally, I still smoked like crazy and every allowed break I dragged my drug jonesing body outside to light up. Only problem was this rehab was one of those “do-gooder” religious organizations and they didn’t allow smoking on the premises, and said premises included the sidewalk out front of the building. Oddly, the only sheltered place to smoke was the portico entrance of the bar across the street; all the alcoholics had a hard time standing there while that all too familiar scent of rancid old booze and cigarette smoke wafted out the door.

One morning I went out alone for a quick smoke and, rushing to get back to my kitchen chore on time, I started back out into the crosswalk as soon as the light turned green. Taking the last hit on my cigarette I tossed the butt onto the street just as a motorcycle cop pulled up to the red light.

“Pick up that stinking cigarette butt or I’ll arrest you for littering.”

I stared at the cop, thinking he was joking. But the man was deadly serious. I stiffly walked back as he held up traffic and searched for the offending butt until I found it.

“I see you out here again littering, you’re going to jail.” He was tall, dressed in the leather-jacketed storm trooper uniform that bike cops wore. As I walked past him he towered over me. He was intimidating. I was on parole and couldn’t afford to get arrested. I’d be sent back to prison. I was shaking with anger. I had a major problem with authority, and it was compounded by what I felt was an abuse of power. Frustrated, I gave him a cold stare and then turned to go back inside.

“Don’t you fuckin’ look at me like that,” he screamed.

I was so furious I couldn’t see straight. I hated cops. I hated them with my entire being. There was a knot in my chest, my head was pounding, and I had an unbelievable urge to get loaded so I wouldn’t have to feel like this any more.

Yet, like the good little sponsee that I was, instead of relapsing I called my sponsor from the payphone in the rehab’s dayroom.
“I fucking hate cops!” I told him after I had replayed the entire incident in vivid detail.

“Don’t let that guy get to you,” he said. “You can’t afford to get all emotional because some idiot’s having a bad day and took it out on you.”

My sponsor then went on to talk about acceptance and how I shouldn’t get caught up in my emotions, especially not in early recovery. “You need to forgive him and move on.”

“I can’t forgive that asshole.”

“You will if you want to stay sober.”

I was still angry when I hung up the phone. I couldn’t forgive that cop. But I could be in acceptance that he was a jerk who abused his authority. My sponsor was right. I didn’t need to dwell on it any longer.

Slowly I mumbled something I’d heard at every meeting.

Still, I didn’t forgive the man. I hated cops, but if you had asked, I’d have told you it was over and soon forgot the whole thing.

Fifteen years later I’m back in court. My lawyer has petitioned the State of California that I be granted a Certificate of Rehabilitation, which is the first step toward getting my record expunged. This is not a simple undertaking. There is a mountain of paperwork to fill out and submit and many hours of preparation to even get a judge to consider it. Then of course there’s the need to present evidence that I have indeed been rehabilitated. Since that last rehab I’ve continually stayed clean off drugs and alcohol, I’ve been an active member of the AA recovery community, sponsored others and been of service; I’d attended grad school and gotten my master’s; worked in recovery, taught college; and written and published a memoir. None of those by themselves were pardonable accomplishments, especially not for a normal non-drug addict type person, but all of them together represented a definite change of behavior from who and what I used to be. Hoping the judge would be able to decipher this as well, I headed back to the courthouse in downtown Los Angeles to hear his decision.

Unfortunately I was running late, stuck in gridlock on the 101 at 8 am. Gunning my car onto the nearest off ramp, I pressed down hard on the gas pedal and blew through a yellow that was turning red. Hey, it was my big day and I couldn’t be late for court. Seconds later there’s a cop on my ass pulling me over.

I’m idling at the curb when over the cop’s P.A. I hear, “Driver, turn off your vehicle and raise your hands in the air!”
What the hell?

“Driver, slowly step outside the vehicle!”

You have to be joking. This is ridiculous. Doesn’t this cop realize where I’m going? A sudden rush of heat flushed across my neck and face and I was shaking with anger as I got out of the car.

“Know why I stopped you?”

I was spread eagle across the hood as he patted me down. There was a knot in my chest, my head was pounding, and I could barely talk. “No officer, I don’t.”

“You still on parole?”

“I just pulled up your rap sheet. Shitheads like you don’t change.”

All my old resentments against the police were bombarding my brain as the cop wrote me a ticket for a moving violation. What the hell, here I was on my way to court to get a certificate of rehabilitation and I’m still getting judged for my past. Then an old memory of that motorcycle cop outside of the rehab hit me, and the words of my sponsor quickly followed. “You need to forgive him and move on.”

But obviously I hadn’t forgiven that cop, or any cop for that matter, and now here I was, full of anger and resentment and it wasn’t the cop’s fault, it was mine. I’m always going to be a criminal in their eyes. But to not be a criminal in mine there has to be an internal shift; more than just a piece of paper that says I’ve been rehabilitated.

Closing my eyes I slowed my breathing and concentrated on relaxing my taut muscles. I felt my pulse decelerate and when I opened my eyes the cop was standing there, my ticket in hand.

“Do I need to breathalyze you?”

I took the ticket. “You have a nice day,” I said, and I truly meant it.

Originally published in The Fix, January (2018)