There’s a Crackhead at My Window 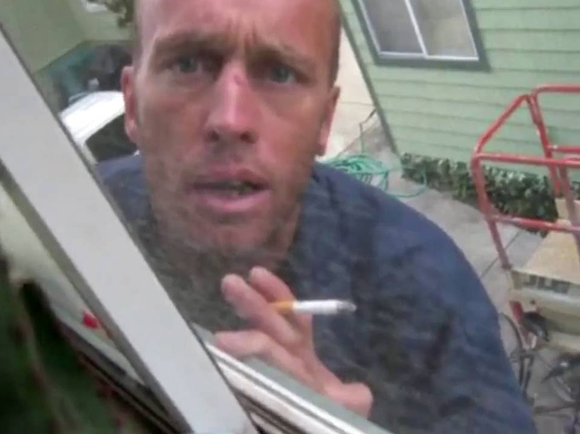 I don’t mean there’s a crackhead outside that I can see through the window. I mean there’s a crackhead pressed against my office window. He’s up on the ledge, a few feet above the bushes, his face pressed flat against the windowpane, one eye staring down at me, the other wandering. I hear him talking, watch his lips as they move, his breath fogging the glass. I can barely catch what it is he’s saying – the noise of the passing traffic on the street below is loud. But when it subsides I can hear him describing, in detail, a litany of problems, talking about all the people who are out to get him: the police, the FBI, the terrorists and something about an unholy, immoral, Jesus-hating Jahad.

From the pained expression on his face, it’s like I’m looking at a cornered animal, only he’s the one outside, nothing but the sky at his back. I’m the one caught in a room with only one way out.
His wandering eye stops moving. For a millisecond we make eye contact. Then he begins mumbling again.

My phone rings. I answer. It’s the front desk.

“Mister O’Neil?” asks the receptionist, “is there somebody outside your window?”

There’s a crackhead at my window. I can hear his fingers beating an unhurried melodic rhythm against the glass, the rumble of this morning’s traffic accompanying him like a throat singer’s slow vibrato. I can hear the receptionist breathing in my ear, the phone receiver cold and impersonal against my face. There’s some sort of static, there’s an annoying hiss, there’s people talking in the lobby. I want to hang up. I want to ignore everything that’s going on.

“A neighbor from across the street, actually the bartender who works at the bar on the corner, called to report someone lurking on the side of the building. Just to be on the safe side, I had someone from maintenance go outside to check. He said that there’s a man on the ledge outside your office. Is that true?” 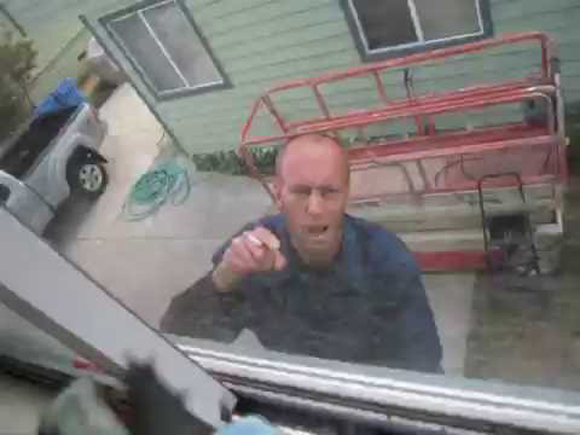 There’s a crackhead at my window. He’s busy drawing stick figures in the mist his breath leaves when he blows on the glass. The tip of his finger turns white as he moves it against the window in a circle forming the stick man’s head. I’m wondering if he’s drawing his life story, or maybe it’s a sketch of those people who are out to get him. Either way, before he can finish, the figures disappear, leaving small greasy circular marks.

He looks down at me. I look up and wave, point to the phone, mimicking that I’m busy talking. I get the feeling that he understands, because he goes back to breathing on the window while drumming his fingers. Tap, tap, tap, and then this little double da-da, like he’s dashing out Morse code.

“There’s a crackhead at my window,” I say and listen as the receptionist holds her breath.

“Yeah, I do believe he’s a crackhead. He’s certainly not a speed freak, definitely not a dope fiend, too spaced to be just a pot smoker, and way too coordinated to be a drunk. So yeah, he’s a crackhead alright.”

I hear a phone ringing in the background. Apparently she’s too preoccupied wondering what to do about the crackhead to answer the incoming calls.

“Do you want me to call the police, the firemen, the paramedics…?” 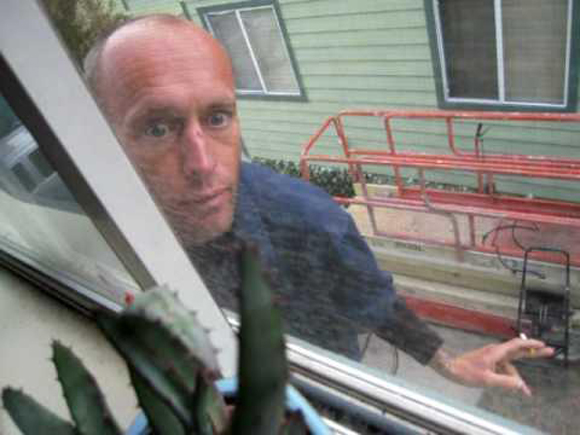 There’s a crackhead at my window. His shadow hovers across my desk blocking out the sun. With one finger he points at me, then he points at his head. There’s so much pain in his eyes, it’s unnerving. He shakes his head and repeats the same cycle, pointing first at me, then his head, me, his head – over and over again.

I put the phone receiver down, stand up, and walk closer to the window.

He nods yes, blows on the glass, writes “hepl” on the mist his breath has left. I pick up a pad of paper and write the word help and show it to him. He breathes on the window, writes help backwards, and smiles.

I sit down at my desk, the pad of paper still in my hand. I’m thinking maybe I should be feeling all warm and fuzzy after having shared such a tender moment with a stranger, but I don’t.

Looking through the smudged glass I see the crackhead’s scabby face, dried spittle forming lumps at the corners of his mouth, the whites of his eyes, bloodshot and yellow. Behind him the San Francisco skyline: the new federal building, the Holiday Inn, the high-rises of downtown.

There’s a crackhead at my window. He’s standing there and I don’t know what to do. After all what are my options? Give him money so he’ll go away, probably to buy more crack? Call the cops and let them deal with him? Keep smiling, waving, ignoring him until he loses interest, leaves on his own accord? None of these are feasible options, none of them the right thing to do.

The clock reads eleven forty-five. Fifteen minutes until lunch. Fifteen minutes of us staring at one another. I get up, face the window, shrug my shoulders and wave goodbye. The crackhead looks puzzled, like he’d never expected this to happen. I can’t sit here with him standing over me any longer. My office feels strange and I’m beginning to feel self-conscious. My window is now a mass of fingerprints and smudges.

Stepping out into the hall, I run into one of my co-workers.

“There’s a crackhead at my window” I tell her, then turn and walk into the lobby.