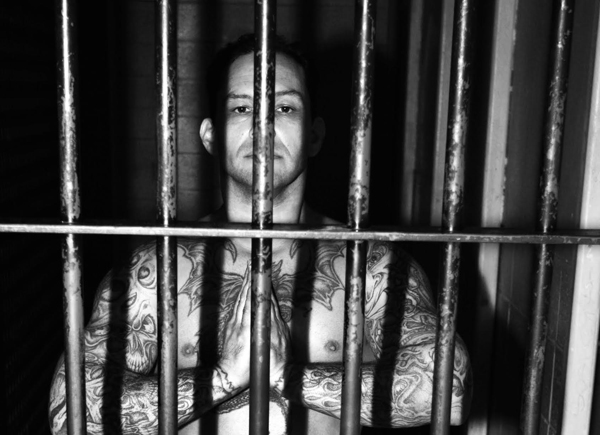 Anthony sat on the floor, mindful of his breath, getting ready to meditate. But there was no room. He was all squeezed up by the front bars, his knees below the bunk, his back bent sideways, and he cursed the damn cell for being too small. Less than five feet away, on the back wall, was the steel toilet, and he didn’t want his face anywhere near that shit, so he had no choice but to be uncomfortable where he was.

In general population your commode was sparkling clean. Hell, dudes even stored food in them like free people on the outside with their insulated beer coolers. But here in the Segregated Housing Unit—known to one and all as the SHU—it was nothing but snitches, “J” Category crazies, and stone cold killers like Anthony doing “administrative detention” and none of them, Anthony included, kept a tight house. Especially seeing as how you couldn’t get any quality cleaning products. Correctional Officers considered them contraband, meaning they could be used as chemical weapons. Last thing a CO needed was some overly depressed sociopath drinking bleach or tossing Ajax in another maniac’s face.

Still, Anthony wanted to get his meditation on. He’d been stressing like a motherfucker and thought if he could just get in a fifteen minute sit he’d be all right. Only Rebel, Anthony’s cellie, had a different agenda and wouldn’t shut up for one minute, let alone fifteen. His newest outrage, another example of disrespect; the oatmeal crème pie was missing from his bag lunch. Which of course elicited an ongoing verbal rampage.

“Know them mutha-fuckas in the kitchen stole it, ” said Rebel.

“How can ya say that Ant? Oatmeal crème’s my fave, bro.”

There was no consoling Rebel. He wasn’t going to just say “oh well” and forget all about it. In fact nine months from now when they finally released him from the SHU, he’d take his time getting reclassified and then reassigned to food service. Until he too was part of the assembly line putting together the bag lunches every convict got for their mid-day meal. And then when Rebel looked down that long line of men, each with their own integral assigned dietary segment in their hands, that when put together made up a state certified nutritious 750 calorie meal, he peeped cookie dude all the way at the end. Feigning he’d run out of plastic sporks, Rebel made his way to the boxes of supplies that just happened to be at the end of the line. But as he got up close to the shelves containing dry goods, instead of grabbing a new box, he sided up next to cookie dude and said, “hey, motherfucker.” While slipping out a slim piece of steel he’d managed to get loose from one of the food carts, and for the last four nights scraped against the concrete floor of his cell until it was as near pointed sharp as it was going to get. In one fast fluid ultraviolent movement that everyone else in the room was going to swear they didn’t see, he drove that honed piece of steel through cookie dude’s neck, killing him dead. No matter that the jobs were rotated and it wasn’t the same man that had failed to put the little cellophane wrapped baked good into Rebel’s bag lunch that day, way back when he was in that cell with Anthony.

“Fuck with my oatmeal crème, you die,” he said as they led him off in handcuffs, his kitchen whites covered in blood. Everyone else just staring at him—because like who really cares that much about a damn cookie.

But right now Anthony didn’t know any of that was ever going to occur and besides he thought Rebel weak, not to mention a dumbass, so he just told him to shut up and went back to staring at the cement slab wall on the other side of the bunk.

“Gots to get my nirvana on,” he whispered.

Anthony’s eyes were half closed. Deep in meditation he was letting go, feeling an overwhelming sense of relief from his anxiety. He saw himself leaving prison, dressed in street clothes, his mother hugging him, an unknown child at her feet. In the center of his chest grew an emotional knot. Anthony was doing life without possibility of parole. He knew that moment would never come. Returning his concentration to his breath, he let the images fade, and wiped the tears from his eyes.

Anthony’s life had been a series of disappointments and this recent prison sentence was no different. At his trial he had just barely escaped Death Row. Murder One was no joke and the DA was hell bent on making Anthony another trophy in her collection of high-profile-low-life convictions. But in their over zealous bravado the cops had really fucked up Anthony’s case. The investigation was shoddy, witnesses coerced, and the evidence was so tampered that even the judge got indignant. Anthony’s PD had all but said it was a mistrial, and it would’ve been if Anthony’s DNA hadn’t been all over the deceased.

“Ever heard of gloves?” asked his PD.

It took the jury 20 minutes to return a guilty verdict. Anthony’s life would’ve flashed before his eyes had he been paying attention. Instead he just concentrated on the DA’s tight skirt and round ass and knew that was the last piece of trim he was ever going to see.

Then it was shackles, a one-way ride on the grey goose up to SQ, and 60 days in R&R. No cigarettes, no showers, no chow hall, just bag lunches and 24-hour lockdown with a noise level that would block out a 747 taking off.

“Winner winner, chicken dinner, we gotta room with a view for you,” said the CO. “Next thing smoking to Folsom, roll it up.”

Anthony didn’t know shit about Folsom, and that afternoon he sat on the bus in leg irons handcuffed to a serial killer from Tulare and watched the San Joaquin Valley slowly roll by. It was twilight and one could even say a bit beautiful. The sun setting behind them as the bus drove through a small town. A dark building with a huge wall rose up in front of them. It was old school creepy and looked like Dracula’s castle. And something inside of Anthony’s stomach twisted a little. But it was back to another month of R&R before he’d see the joint for real.

His first day in Gen Pop Anthony hit the yard dressed out in his pressed blue bonaroos and freshly scrubbed white Adidas. He was cool, he was popping, he had his stroll down to perfection as he made the handball courts. And then some J-cat going all spaz-mode for the ball stepped backwards to make a long shot, and stomped on Anthony’s brogues. All the dudes in the clique went silent as Anthony inspected the offending scuff on his shoes. He had been up all night with a state issue toothbrush getting those fuckers ready and in one second flat whacko boy had fucked them off.

Anthony’s anger grew up inside of him and it was on. The J-cat never saw it coming. Anthony has been in the SHU ever since, and Rebel was there waiting for him.

Opening his eyes, Anthony is stuck with the futility of it all. Amongst the constant screamed conversations that bounce off the cellblock walls there is a silence in his heart.

Originally published by Out Of The Gutter December 29th, 2016