You Can Borrow My Higher Power 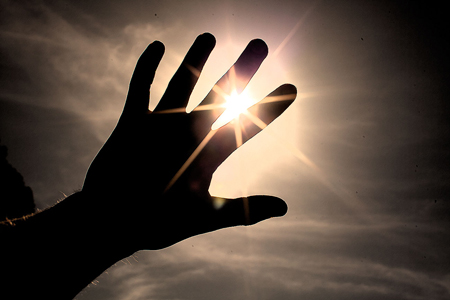 I often hear people share in meetings that a Higher Power is a tough concept to deal with. Like many folks, when I first came into the fellowship, the “God” parts of the 12 steps repulsed me. All my life I resented the hell out of what I felt was the hypocrisy of organized religion; with their unyielding stance against abortion, premarital sex and homosexuality. Not to mention the creepy “he’s always watching” aspect of a god on high. I really didn’t want to be damned to hell for my sins, (not that that ever stopped me from committing a plethora of them) but wanting an avenging merciless god in my life just never made sense. So why would I want to become involved in a religious organization?

At the time, everyone I talked to assured me that wasn’t the case, AA wasn’t religious, it was spiritual. Which made about as much sense as saying drugs weren’t addictive, they were just habit forming. Worse, everyone always told me to read the “We The Agnostics” chapter in the Big Book, because all my answers were there. Unfortunately all I got out of reading it was something like, you might not believe in god now, but you will. Which didn’t instill a lot of faith in me.

Later on, I jumped ship to NA because their literature and concept of addiction appealed to me more. Although, before we go any further let me back that up by profusely stating I am not someone that talks badly about another fellowship. I found what works for me. If another fellowship works better for you, then I support you wholeheartedly and I hope you do the same. So please, do not mistake this as some angry diatribe about why NA is better than AA—because it isn’t.

Even though I changed fellowships the NA steps and literature are just as full of that damn god again and it caused me to have a resentment. Certain aspects like the capital “H” in him and the BIG “G” in god could send me off on a cantankerous denunciation against religion. Even though there was no pretense that I had to worship Christ, there was still an undue amount of “prayer” talk. Sadly this kept me from working the steps for over a year. Unfortunately that year was horrible. I was a resentful newcomer judging everyone. It wasn’t until I was in so much emotional and spiritual pain that I literally said “that’s it, I’m done,” and began working the steps.

Now I had no problem with Step One. I was powerless and my life was truly unmanageable. I had lost everything. My family had practically disowned me, and due to committing crimes to pay for my addiction to heroin, I had been to prison. In fact, if I ever got busted again I was going back to do 25-to-life behind bars, yet I still wanted to use. So yeah, that step was pretty easy and I totally agreed with it.

Then I got to Step Two where it said, “a Power greater than ourselves,” and I got all twitchy again. Here was that damn “Higher Power” crap raising its ugly head, which I was more than convinced was a thinly veiled reference to God. Although I did appreciate that it was labeled a power and not a god, so I gave it a go. First listening to other addicts at meetings talking about the fellowship being their Higher Power, or nature, or the ocean, or… and this is the best thing I ever heard, “anything can be your Higher Power as long as it isn’t you.” And I was like, “now that makes sense.” Besides at the time I was on parole with the State of California and at the whim of my parole officer I could be sent back to prison. Uh huh, now that was a power greater than myself, so okay, next.

But then I was faced with Step Three: “We made a decision to turn our will and our lives over to the care of God as we understood Him,” and I freaked. There it was again, that “God,” and “Him” and well yeah, I hit the recovery skids and I wasn’t sure I could continue my step work. I think I actually told my sponsor that I’d have to reevaluate this whole “recovery deal.” I was totally disillusioned and I dropped into a prolonged state of depression. Luckily, I hit a lot of meetings looking for answers. One night at a particularly gnarly one in the depths of San Francisco’s Tenderloin neighborhood, I heard a homeless man describe his Higher Power as a naked goddess with three breasts (he was really adamant about the three breasts part). I thought he sounded crazy and his Higher Power absurd, yet the rest of that man’s share was spot on perfect. The clincher was, at the end of the night, he left serene and calm to find a place to sleep in the streets. I headed home to my three-bedroom apartment, in a trendy sought-after neighborhood, totally angst ridden with a symphony of self-doubt playing in my head.

It was not long after that that I worked this “Higher Power” issue out. I don’t do God. I do a god of my understanding. Which is a power greater than myself. I do not have to name this power. It does not have to be an entity. It is more encompassing because it is the universe, and when I turn my will over to my higher power I am in rhythm with the universe. Also it doesn’t matter what your god is. If you chose to call it a name, more power to you. You can even capitalize its name. I do not care. Because your Higher Power is not my higher power and it will not keep me clean.

I know this sounds incredibly simple. But the reality is that recovery is simple. All you really have to do is do the right thing and be of service to others. Everything else is just worry and regret. I spent too much time stressing about the small things like language and labels, when all I had to do was turn it over. Not so strangely the minute I actually did, something as mundane as reading the word “God” stopped bothering me. So if you were like me and the god thing was interfering with your recovery, just let it go and borrow my higher power. That way you can stop trying to define it, until you have one.