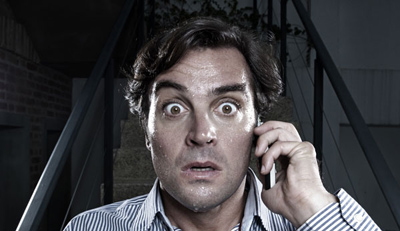 If you’re new to recovery, just starting out in a 12-step fellowship, or fresh out of rehab, please stop reading this right now.

Okay, now that they’re gone, let me just say one thing. The recovery phone call sucks. It doesn’t matter if you’re a newcomer or a seasoned veteran with 20-plus years. Making that call is so awkward and uncomfortable that most of us would rather just wallow in our own misery.

You know the phone call I’m talking about. It’s the one where you ask for help. Like when you’re new to the fellowship and you’re told to get numbers from folks you don’t even know and to call them every day. Those are the worst phone calls ever. They are worse then the most self-conscious first date phone calls when you were a teenager—and you don’t even want to have sex with the person on the other end of the line.

But let’s face it. The reality is that you really don’t want to drink or do drugs and some grumpy old guy at the meeting told you that you’re going to die from your disease if you don’t follow direction. Right then and there the only thing you may have been really frightened of was turning into that grumpy old guy. But you listened to him because that’s what they tell you to do and you nervously asked a couple people for their numbers. Usually it’s the few folks that don’t scare you, like the guy making coffee. He actually said “hi” to you, although you are pretty sure that’s part of his commitment.

Really you wanted to ask the cute girl who does literature for her phone number. But there’s the heinous rule where it’s the men with the men, the women with the women. Besides, you really didn’t know what to say to cute girls anymore. Used to be that you’d meet them in a bar, get hammered, take them home and bang their brains out and then move in with them the next day. But apparently that’s out. That was the old you, the drunk you, the dope fiend you. The you that used people and had no conscience. That guy didn’t really have friends, he had drinking and drugging buddies. His relationships were a mess, his life was in ruins.

That’s why you have to make these recovery phone calls. You have to start forming relationships that are built on trust and empathy. You have to learn to care about those around you and be of service. Although you really have no idea what “being of service” means. That grumpy old guy just told you it meant to put away the chairs, but that can’t be all it means since the cute literature girl said her commitment was almost up, and that maybe you (being a newcomer) would like to “be of service” and take it. That’s who you should’ve asked for their number, but all you could do was picture her naked in bed and she got pissed and told you to stop staring at her.

Here’s the real deal. Forget the literature girl. She’s a psycho and will marry that biker dude in the back of the room. Less than a year from now she’ll be knocked up and they’ll be living with his mother in her double-wide trailer. Sometime before biker junior pops out and biker senior runs off to be a deadbeat dad, cute literature girl will be hating life and contemplating relapse. But those phone calls? They are really what is going to save your life.

You’re going to go through some really hard times in sobriety and you are going to want to pick up a drink or do some drugs. When your entire life seems to be hitting the skids and your future looks dark, you’ll find the strength to lift up that thousand pound phone and call a fellow addict or alcoholic. They’ll talk you down, tell you to go to a meeting, call your sponsor or to help a newcomer.

Those phone calls suck worse then the newcomer cold calls. They’re like calling up your dentist and telling him your tooth hurts again for the twentieth time. And he’ll ask, “are you flossing? Do you brush on a regular basis? When is the last time you had a cleaning?” And when you tell him “no, no, and you don’t know” he’ll give you an earful, yelling “do you want to lose your teeth?” It’s the same thing with recovery calls. Your friends from the fellowship will say, “have you been going to meetings? Have you worked a tenth step around it? Did you call your sponsor?” While the truth hurts, it’s better than relapsing into a world of incomprehensible demoralization. Or waking up pregnant and alone in your mother-in-law’s double-wide trailer.

I know that none of you newcomers stopped reading when I told you. In fact, I know my warning just made you want to read this even more. There is nothing worse then the word “no” to an alcoholic or addict. But what I’m trying to convey here is that no one is comfortable making those phone calls—yet we all have to. It is what we learn to do in recovery. By picking up that phone, we save are own lives.

So if you’re new and stressing about making those calls. Go ahead and just do it. Don’t worry about being cool. Just be nerdy, wait out the awkward silences, engage in that horrible small talk, hell, even mention the weather—it’s all good. Do it because once you’ve gotten over the fear of those little phone calls, the big ones that really matter will be easier. When you find yourself in that depressingly horrific place that we all eventually find ourselves in, you’ll know what to do. Make the recovery phone call a regular part of your program, just like you do with meetings and step work.

Oh, and one more thing. Remember when you asked me for my number and I said, “no problem, call me anytime”? I didn’t mean for that to sound like you could call me at 2 am. So “anytime” doesn’t really mean anytime. It means after 10 am and I’ve had my coffee, and before midnight when I’m still semi-coherent. Thanks.