Thanksgiving is an Eating Disorder Nightmare 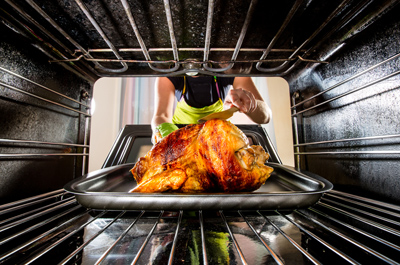 The weather has changed, summer is over. Last night in Los Angeles I actually had to put on a coat. While I am not one to run out into the elements, gleefully trudging through a first snow or rushing to the countryside to witness the changing of the leaves (it’s the west coast we don’t do any of that seasonal activity crap) the loss of 15+ degrees of warmth signals it’s that time of year again. The goddamn holidays have returned.

Of course this means I’ll soon be inundated with invites to dinner parties and festive gatherings. You would think as a socially challenged ex-drug addict in recovery I’d be happy that folks want to share their lives, love, and holiday cheer—and for the most part I am. But because I’m also a bulimic in recovery, it is just not a good time for me.

There is nothing more challenging than making it through a dinner party without overeating, and the worst of all is Thanksgiving. Seriously that meal is an eating disorder nightmare. For most “normal” people it is a festival of gluttony they actually enjoy. For a bulimic it is an instant relapse disaster just waiting to happen and I dread it. The mountains of starch and calorie-laden foods make navigating the dinner table a treacherous affair. If my program of recovery is not solid or I am just not on my “A” game that day, I can be stuffed full of mashed potatoes, candied yams and pumpkin pie in ten minutes or less. When my body dysmorphia goes into overdrive, I will literally knock folks over as I scramble for the bathroom to lose it all.

A few years ago I decided that the whole ordeal just wasn’t worth dealing with and made a commitment to do something different. First, I stopped going to my family’s gathering. I can see them any time of the year, without the excuse of communally chowing down a million calorie food extravaganza. Plus, I’m a vegetarian, so even the non-red meat alternative of turkey is not enticing. What’s worse, none of my relatives are capable of carving the damn bird, and my mom always asks me to do it. Yup, they make the only person in the room that doesn’t indulge hack up the dead animal. There isn’t even the pretense of a healthy low-calorie alternative, like a salad. So really, what am I doing there besides eating heavy food I don’t want and chalking up new resentments against a group of people I have worked very hard to not resent?

I have tried to explain to my family that I have an eating disorder and they just don’t get it. I doubt that after a good meal, any of them obsessively stare at themselves in the mirror in an effort to discern if any poundage was instantly acquired. I’m happy that they do not suffer the same crushing psychological torture that I do. But after years of dealing with my bulimia I could not justify putting myself in harm’s way just to celebrate another holiday of excess. I simply decided to gracefully opt out.

This brings me to the second part of my decision, which was to not fall prey to the peer pressure of well meaning friends. “You’re not planning on being alone for Thanksgiving!?” Is the usual refrain when they find out I’m not going to my family’s for the holiday. Unfortunately such disclosure evokes wanton fear in their collective souls. They are mortified, certain that I will be sitting in a dark apartment, starving myself to death, weeping into my tepid gluten-free bottled water and commiserating with my cats. Hey kids, it’s just not my holiday and I’d prefer to take a rain check if you don’t mind. Can’t I come over when there’s not a meal involved?

More than once I have fallen for their sentimentality. “Come on, celebrate the holidays with your friends, what could go wrong?” Unfortunately, what I have found is that I am not to be trusted with a table full of food. Something about sitting down with a bunch of ravenously hungry folks that just want to get their grub on, tunes me into that same wavelength. Before I realize it, I’m caught up in their feeding frenzy. Filling my plate as if I’m an emaciated steam-table devotee at an all you can eat smorgasbord, going back for seconds and thirds. Maybe everyone else knows how to stop when they’re full, but I take it way past just eating for pleasure to a shame and guilt celebration of major proportions. You’re not going to eat that last helping of green bean casserole? Well, then move out of the way and let me show you how a real binge eater goes to work!

Sadly it took me years to realize this. But at least I have finally figured it out. My eating disorder is not any different than my drug addiction. Quite early on in my recovery I totally got that saying, “one is too many and a thousand is never enough” when it came to drugs. Yet, in the beginning, it never quite connected when it came to food. I would binge on sugary snacks and comfort food in an effort to numb emotional pain, then purge when I realized that, just like drugs it didn’t work that way. It’s an inside job and I have to work a program of recovery, not stuff Pop Tarts into the gaping holes of my soul.

I consider Thanksgiving and its over abundance of food a massive trigger for my bulimia and equate it to my addiction to drugs. If I was still shooting heroin and my dealer invited me over to his house, offered me a table full of drugs and said, “help yourself” I would use until I OD’ed, passed out or both. Since I am in recovery, would I even go over to the dealer’s house if he invited me? Hell no. So then why would I do the same thing with food?

I know that this may seem drastic to some people. I can almost hear a few of you mumbling that it is only food and not drugs, so what’s the big deal? I may not be committing crimes, or going to jail, or landing in the emergency room from my eating disorder, but for me it is just as devastating and demoralizing as relapsing on drugs or alcohol. So how many times do I have to keep doing the same thing and expecting different results? The answer is that today I have a plan of recovery for my bulimia and I don’t have to keep engaging in behaviors that ultimately cause me to dive deeper into self-loathing and despair. Learning to say no is part of that plan.

Now you’ll have to excuse me. I’m late for my OA meeting.