One Drink, What Could It Hurt? 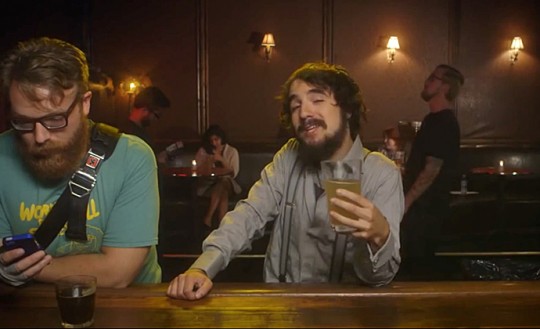 I’m at an art gallery opening. It’s a hot Friday night and the place is packed. I’ve done the required loop of the room, staring at the artwork on the walls, and now I’m over by the food, a table of crackers and cheese, crudités, and some unrecognizable meat on a stick. Not in the mood to eat, I turn toward the bar. I could really use a club soda or a Pellegrino on ice. But it’s a full bar and there’s a crowd in front of me, so I wait my turn.

A group of bearded, plaid-wearing hipsters are hogging up all the available space and ordering a ton of drinks. When one of them looks over his shoulder and sees me waiting, he asks if he can order me something. I say, “Yeah, a club soda would be great, thanks.”

And then here I am once again stuck deciding how to approach this. Should I say, “I’m in recovery, I don’t drink” and possibly have to deal with the moral high ground fallout that happens whenever I choose this option? Because a lot of people get weird when you tell them you don’t drink. They mumble excuses or try and justify their own drinking: “Oh really? Actually, I only drink on weekends,” “I’m only having a glass of wine,” “I don’t usually drink hard liquor,” “I’ve been thinking of quitting.” And really, I could care less what they do. It’s a personal choice I made. I’m not judging them.

Instead I do what I usually do and just say, “I’m not drinking right now,” thus avoiding any confrontations, or unnecessary misunderstandings. Only tonight, hipster guy is feeling his oats, or maybe he just doesn’t like to drink alone. My not drinking in a gallery full of folks that are drinking shouldn’t upset the earth’s balance but apparently it upsets hipster guy because he says, “Dude, one drink. What can it hurt?”

And yeah, what can it hurt, right?

Alcohol isn’t my biggest problem. But it could easily be. I mean, don’t get me wrong. I’ve drunk my fair share, usually to a blackout, waking up in unfamiliar places with no idea how I got there. I’ve been in way too many bar fights, and I’ve even been known to tell a pathetically slurred version of my love life to a bartender now and then. But if I were given the choice between my first love, heroin, and a scotch on the rocks, I’d choose heroin every time. After all, I was a junkie for over 18 years. I’ve got an invested interest in that shit. It destroyed my life. It brought me to my knees, and then I found recovery. Which, right now, is not something I’m willing to give up for just one drink. Because even though alcohol is not my drug of choice, I know that once I start, one drink isn’t going to be enough.

Fifteen years ago, I’d just gotten out of my second rehab. It wasn’t 12-step based but what they call behavior modification. They tore you down by yelling at you, calling you a scumbag and a loser—which, back then, I already knew. But whatever, it worked for a while and it seemed to make the counselors happy to yell at me. So I went along and actually stayed clean for 18 months. Then I met this girl who was fresh out of detox. So of course we moved into a tiny studio apartment together, and for a couple of months, everything was going smoothly. I was going to work every day and trying to exist in the straight world after years of being a drug addict criminal. Then one night we were at a really nice restaurant known for its vodka drinks. We were sitting there with our menus watching these scantily clad waitresses pass by with trays full of giant martinis. Their double olives and dripping condensation looked so good that we just nonchalantly ordered two. Then two more. And I remember ordering another round before I blacked out.

The next morning, I woke up with the second-worst hangover of my life and said, “I’m never doing that again.” And I probably meant it. Yet an invisible line had been crossed. I’d given myself permission to use after a year-and-a-half of abstinence. Of course I kept it a secret from my family and what few friends I still had, going about my life as if it never happened. That is, until I hurt myself at work, scratching my cornea so bad that I couldn’t see. At the emergency room, the doctor said I’d be in a lot of pain while it healed and gave me a prescription for Vicodin. Deep down, I knew I should’ve said something like, “Hey, I’m an addict, I can’t take drugs.” But I didn’t.

Two days later, I’d taken all 60 pills. I called the doctor and explained I’d lost them because I still couldn’t see very well. He called in another prescription of 60, and this one had a refill. A week later, after a few days of withdrawals when the pills ran out, I took a cab down to the part of town where I used to cop on the street, back when I was first starting out. Surprisingly, every dealer I’d known before was still there and it was pretty easy for me to score heroin. The first shot felt like poison, the second shot I OD’ed and my girlfriend called the paramedics. When I got out of the ER, I went back to the corner and scored again. In just 48 hours, I was back at square one with a habit to feed. Took me another six months with my parole officer chasing me before I was through and got in another residential rehab. And although this may not make a lot of sense to those who aren’t alcoholics or addicts, if I hadn’t taken that first drink, my chances of staying clean would’ve been much better. Who knows, I might have even gotten tired of trying to do it all by myself and gone to a meeting to ask for help.

Hipster guy is still standing there. He won’t take no for an answer. In fact, he’s almost demanding that I drink. “Dude! Come on. Party with us!”

Not wanting to prolong this any longer, I turn to him and say, “Believe me, you don’t want me drinking. Because first of all, what you’ve got here isn’t enough and it’s not the type of dope I really want anyway. But I can promise you, as soon as I get a buzz-on? I’ll definitely end up robbing you so I can go buy the drugs that I really crave. But before that happens, what I’ll do is get really sloppy, cry in my beer, and then punch one of you out. Okay?”

Of course I know that will pretty much bring any and all future social interactions with him to an abrupt halt. So while hipster guy and his pals stare wide-eyed with their mouths open, I slowly back away. Finally alone, I meander about the gallery, still thirsty and wishing I had a Pellegrino.


Originally published as “How One Drink Leads to a Heroin OD” by AfterPartyMagazine June 3, 2014