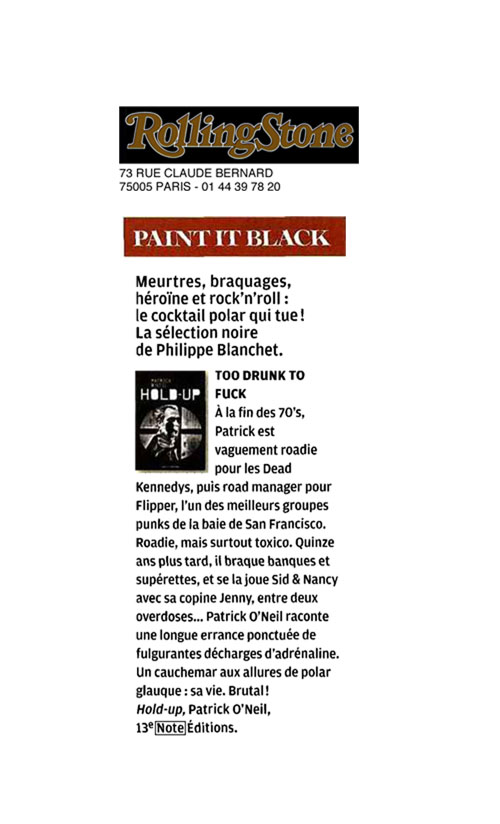 Murders, robberies, heroin and rock’n’roll:
the polar cocktail that kills!

TOO DRUNK TO FUCK
In the late 70′s, Patrick was a roadie for Dead  Kennedys and road manager for Flipper, one of the  best punk bands of the San Francisco Bay Area.  He was a roadie, but mostly an addict. Fifteen years later,  he’s robbing banks and supermarkets, and playing Sid &  Nancy with his girlfriend Jenny, while surviving two  overdoses …
Patrick O’Neil recounts this long journey punctuated  by lightning discharges of adrenaline. A nightmare-like  creepy thriller: his life. Brutal!

Patrick ONeil is the author of the memoirs: ANARCHY AT THE CIRCLE K (forthcoming), GUN, NEEDLE, SPOON (Dzanc Books, 2015), and HOLD-UP (13e Note Editions, 2013). His writing has appeared in numerous publications including: Juxtapoz, Salon.com, The Fix, After Party Magazine, The Nervous Breakdown, and Razorcake. Patrick is a contributing editor for Sensitive Skin Magazine, a Pushcart nominee, a two time nominee for Best Of The Net, and a PEN Center USA Professional and former Mentor. He is honored to be on the Board of Directors for REDEEMED, a Non-profit Criminal Record Clearing Project that brings lawyers & professional writers together to help others move beyond their past. Patrick holds an MFA from Antioch University Los Angeles where he is an adjunct faculty member for their continuing education program. Patrick also teaches creative writing at various rehabs, correctional facilities, institutions, and workshops. (Author Photos: Brian Looby)
Close Zoom