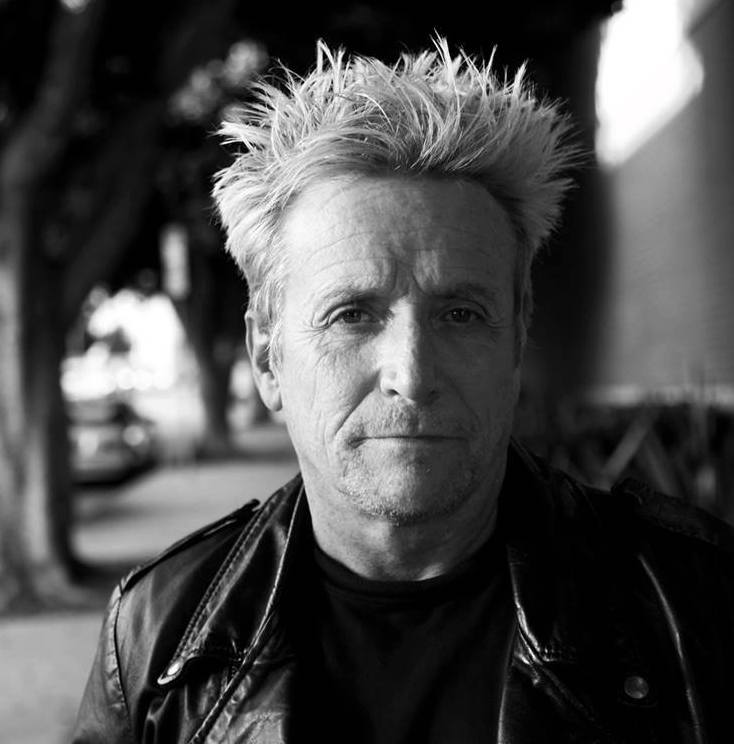 My memoir: Gun Needle Spoon begins with the last years of my heroin addiction, my consequent descent into crime, primarily armed bank robbery, and my eventual incarceration. My final arrest was June 25, 1997, and I look back at the person that I was then and wonder who that person was. He certainly is not who I am today. Over the last 18 years I have worked hard to instigate such an internal psychological change. If you had told me then that I’d become a recovering drug addict, a published author and a college instructor, I would have laughed and told you, “no fuckin’ way, dude!” Heroin addiction’s mental and physical stranglehold combined with the junkie tunnel vision of procuring the drug at all costs, mentally altered me from the person I was meant to be and the direction I was heading. In 1977 I was an artistic kid at art school right as punk rock hit the radar and the music world exploded, flash-forward twenty years later, I was a semi-illiterate career-criminal facing a 25 to Life Sentence under California’s Three Strike Law, and wondering how the hell it had all turned out so wrong. Patti Smith said, “I never thought I was gonna make 30.” Well, I never thought I was going to make 21. It has been a long road to get to who and where I am now, and it makes me wonder what the “1997 Patrick” would have to say to the Patrick of today.

1997 Patrick: “That, my friend is pathetic. I bet you also jog and eat vegan shit, like tree bark, and mung-berries.”

1997 Patrick: “A polio what? Never mind. Look I’m sorta hurtin’ right now. Could I get a couple-a-bucks? Need to get well. You know, take the edge off.”

2015 Patrick: “If I remember correctly. There wasn’t enough heroin in the entire city of San Francisco to ‘take the edge off’—ever. If I was to give you money you’d be off chasing the bag and never come back.”

1997 Patrick: “Like that would be a bad thing? Okay, whatever. So you wrote a book. About me apparently. So I must have some redeeming qualities. Yo, I’m like yer freakin’ protagonist, dude! But what I don’t remember is ‘us’ ever being a writer? What happened, ain’t you fuckin’ dyslexic? Or has eating bunny food cured that?”

2015 Patrick: “Incarceration is what happened. Getting locked in a cell for 23 hours a day with a serial killer for a cellie and nothing to do. I come from a well-educated family. My dad’s an M.I.T. professor. I graduated art school at 21 with BFA in film. I was a rising star in the music industry and then bamm-o, segue to two decades later I’m getting busted and I can barely read the charges the cops are shoving in my face. When the detectives told me to write a statement, I could only scribble cholo-scrawl hieroglyphics like I was tagging a wall with spray paint. Freaked me out. In county jail I started reading a book a day, did crossword puzzles, doing anything I could to not be such an illiterate loser. I didn’t have a guitar, I couldn’t shoot film, and really there’s no creative outlet other than pen and paper. Out of boredom I went to an adult education class—really just so I could get out of my cell—it was a creative writing class. Haven’t stopped writing since. And yeah, I’m still dyslexic, but I write with a computer and there’s this thing called spell check.”

1997 Patrick: “Yeah, OK. But whatever gave you the idea that you should write a memoir. Dude, you ain’t famous. Who the hell cares about some has-been junkie?”

2015 Patrick: “Believe me. I have asked myself that question a million times—especially during the final revision process with my editor. Somewhere around the tenth reading it all seemed so mundane. And I’m asking myself is it really that unique a story, this armed robbery decent into hell and getting off drugs? But then I said that to a friend and they reminded me that your average person doesn’t usually live the life that I have. And what I take for granted as just ‘something that happened’ might actually not be so ordinary. And then of course there’s the redemption aspect of the whole story. I made it out alive from this nightmare existence. Maybe by telling my story and being a role model someone else can too.”

2015 Patrick: “No, it was a necessity. The world is a better place without me running around doing all the crazy shit that I was. Plus, 58-year-old junkies are not pretty to look at. In fact they’re sort of sad.”

1997 Patrick: “So, if that lifestyle was so bad, what’s with all the intense imagery, scenes of shooting up, detailed descriptions of withdrawal, and the execution of numerous crimes? You trying to glorify heroin addiction, or something?”

2015 Patrick: “If anyone is compelled to follow in my footsteps after reading this book, then they have serious issues with perception, or maybe they’re just preordained to addiction. I didn’t hold back or sugarcoat the reality of it all, I just told the truth. Although I can remember when I was a teenager reading Burroughs’ Junky and taking notes for future reference. So who knows?”

1997 Patrick: “Well come on, doesn’t the memoirist have a moral responsibility to dissuade others from making the same mistakes they did?”

2015 Patrick: “Memoirists have to tell their story. There doesn’t necessarily have to be morals involved. There’s room for immoral memoirs. It is really up to the writer and their intentions. I didn’t start out writing a cautionary tale with the hope of trying to stop any potential junkies from fulfilling their destiny. I simply began chronicling what had transpired in my life and then like most initial first drafts a voice emerged and a structure evolved and the book eventually became what it is. And really, the subject matter speaks for itself. The reader is welcome to take whatever they get out of it.”

1997 Patrick: “Speaking of structure, yours is sort of disjointed. It starts at the end, then there’s a jump back in time with a millisecond of your childhood, a chapter when you lived in New York, there’s some L.A. and then it’s San Francisco. It feels like vignettes of memories slapped together haphazardly. What’s the deal there? You couldn’t just write in a straight line?”

2015 Patrick: “The nature of memories, and how they lead into each other is hardly ever simple and linear. Plus I wanted a sense of the “timeless” euphoric haze that heroin produces, which is not present in the second part where I am not under the influence. Recreating that disjointed feeling was essential to convey an authentic drugged out numb without going completely off the rails and writing some unstructured free for all. Yet I had to find a compromise between the two, and I think I achieved that by not using a totally linear structure.”

1997 Patrick: “Hmmm, I have no idea what you just said. But it sounded good. So, what does the future hold for you, Mr. Straight-and-Narrow?”

2015 Patrick: “Another memoir is in the works, a precursor to this one. Back in the ‘80’s before the drugs took over, when heroin was “working” and I was a roadie, and then a tour manager for Dead Kennedys, Flipper, T.S.O.L., and Subhumans. I’m also writing a collection of connected essays on sex that I’m not sure what I’m doing with. And I write a lot of recovery oriented essays for publication. But that last one probably doesn’t interest you. Got any more questions?”