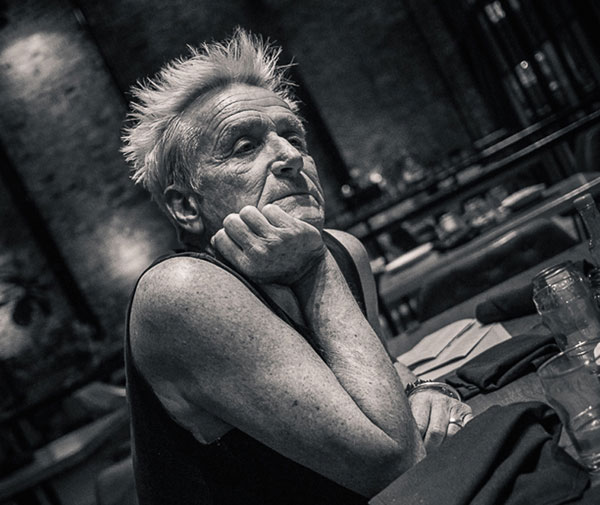 There is nothing easy about turning sixty. The days whip by in a whirlwind, kids look younger, and you can’t understand what they’re even talking about. Cops, bosses, and doctors could be your daughters and sons. Films and television shows are no longer relevant, nor can you identify with them. New music sounds like shit. You see this year’s lineup at Coachella and know none of the bands and it scares you. When did this happen? When did it all pass you by?

I never thought I’d get old, and maybe I would have done shit different if I knew I’d still be here. But I can’t dwell on the what if’s. The if onlys. The why-oh-motherfucking whys, and the wish I hads. Shit happened. Shit be over. Time to move on.

Still, sixty ain’t just something to shrug off. It’s like a milestone, or a stone around you neck, or a fucking boulder stuck in your goddamn orthopedic shoe. It’s way past middle age. It’s way too late for a mid-life-crisis. It’s the start of the golden years. Another mile down a long bumpy road, getting you that much closer to the graveyard.

Seriously man, nothing quite says, “you are fucking old” like turning the six oh. Life was all fun and games until there I was one morning staring at a stranger in the bathroom mirror: spiked graying hair atop a big ol’ Irish head giving way to the constellations of freckles—or were those liver spots, or a fresh smattering of cancerous melanoma? Who the hell knows? But my reflection, an ancient leftover from the punk rock era, revealed someone too set in his ways to drop the peg-legs and torn t-shirts. Perhaps it was all those years of anarchism, rebellion, and too loud music. The product of a liberal left childhood, a chaotic adolescence, a multiple near death experience adulthood, and the drudgery of finding oneself again in the aftermath of it all when you’ve lost everything. Now well past my prime, but too poor to retire, all there is left for me to do is complain.

I remember when I was just a little kid seeing guys that were sixty. They were fucking old. White hair, sharp crease pressed khaki pants that rode way up their torsos and stopped somewhere in the middle of their chest, a button down short sleeve shirt, shaky-ass hands, discolored skin, wrinkles, and maybe even a cane. They’d been in some war, or owned a bunch of shit, or were drunks, or verbally abusive, or angry, and full of hate.

My grandpa, a third degree Knight of Columbus, was an irate alcoholic before there even were alcoholics. World War Two vet. Con man. Liar. Cheat. The man was a menace to his family. Beat his wife and kids: my mom, my grandma – that aunt who now has Alzheimer’s and it isn’t just me that can’t remember her goddamn name. Dude’s final job was maintenance supervisor for the VA hospital, sweeping up the debris left over from the unraveling lives of the terminally insane.

When he lost his shit and slid deep into his own dementia, they took away his broom, gave him a gown, and he was bed number 632 in the same nuthouse institution where he formerly swept the floors. When I was eight my mom dragged me down to see him. I had no recollection of the man. By then his reach didn’t include slapping the shit out of me, so why would I? In the visiting room he sat across from us, a stone cold look of no recognition on his face. My mom left us alone to go buy some good humor ice cream bars, supposedly grandpa’s favorite. While she was busy across the room at the vending machines, I stared at this unfamiliar old man and he looked right through me.

It was summer outside, warm weather, I wanted to be a kid, I wanted to go break shit and be a menace, but I was stuck with the adults. He and I didn’t say a fucking word until mom got back. Trembling hands he bit into his ice cream bar like there were no nerves in his goddamn teeth, the thin chocolate coating flaking off onto his lap and the table, forming dark brown melting puddles, stains that looked like shit on his white hospital gown. There was a big rotating industrial fan in the corner and every few seconds a breeze would blow his stench of decay my way. I knew dude was going to die soon. I didn’t know him well enough to care. Yet his impending demise still scared the hell out of me.

Not that death has ever really been a deterrent. I did a lot of bad shit that taunted the grim reaper and still survived. Nobody thinks about getting old when they’re jabbing a rig full of heroin in their arm. Sure there were the momentary setbacks of an overdose or two. But the sweet embrace of narcaine always brought me back, gasping for oxygen and thinking maybe this time it would all be different and I’d find joy and fulfillment somewhere else.

But eighteen years in the spoon and the world continues while you sit still. Your dealers become children. Your contemporaries are all dead. You start seeking the company of people half your age as anyone as old as you would tell you your time was well past up. And before you know it’s way too late to live fast, die young, and leave a good-looking corpse.

Although have you ever actually seen a corpse? Not a goddamn good-looking thing going on there. I identified my best friend Chris at the morgue. His skin was tinted blue, his arm full of vibrant tattoos partially hidden by the graying pallor of death. The medical examiner pulled the white sheet off his body and I said, “That’s not him,” but it was. It’s the eyes that tell the tale. Nobody was home. The lights were out. I can barely remember Chris’ face now. It’s been so long and they say memory is the first to go. But really its that we all fade away and then we’re gone.

Fifteen percent of America is sixty. That’s forty million sixty-year olds. There have never been more sixty year olds in this country, ever. Folks just didn’t live that long before now. Shit was harder. Your life expectancy was nil from the get go and it didn’t get any better. Baby boomers: born in the ’50s and grew up in the ’60s. Named after the baby boom that occurred after world war two—the fear of dropping atomic bombs had everyone fucking—and now we’re knee deep in old folks and none of us are checking out without at least making some noise. Because you don’t just get old and give up saying you’ve had enough. Any asshole told you life was going to be a circus with happy face clowns and all the sticky pink cotton candy you could eat was lying. It’s peaks and valleys, dude. One day you’re riding high, the next you’re in the gutter telling that wino to move over and share her forty ounce with you.

I know. I had my “getting old” moments and while it’s natural, it’s not for the squeamish. Like when I hit San Quentin’s yard. I was forty. There were a few dudes older than me, but mostly it was a young man’s game. The Pepsi generation doing life without parole, and they had no time for anything that came before them. You could say shit like, “I saw the Ramones play CBGB’s.” And there’d be no recognition, because everything you ever did before they were born didn’t mean shit. Especially not to someone that’s never going to see the free world, or normal society, or go on a date, or even graduate high school.

And even though I was stuck in a five by ten foot cell twenty-three hours a day with a convicted serial killer, I only had two years to go, and another three-year tail of high control parole waiting for me when I got out. I suck at math, but even I could figure out I had a release date. I knew I was getting out. All those youngsters could do was quote the Who song they had never heard and sing, “Hope I die before I get old,” and then get in line for chow. Which nine times outta ten was another unidentifiable meat patty, two kinds of starch, and you could call that vaguely green stuff a vegetable, but you’d be lying. Touch my cake. I cut you.

It was the same boredom, over and over. Until one afternoon before count outside a top tier cell, I got stabbed twice. Motherfucker came at me with a dull ass piece of steel. Took it deep in my arm and then another in my wrist; thirty stiches and no drugs. They call them defensive wounds. I called them living to see another day. The nurse poked the needle through my skin, a taut suture across the red gash open wound. She was getting irritated with me ever time I flinched.

“You put yourself here,” She scolded. “Now sit still.”

“You every hear of using a local anesthesia?” I interjected.

Twenty years later and I’m still alive. Apparently it’s hard to actually kill me. Or so I’ve been told. Thank all the paramedics, doctors and nurses. It’s not like I didn’t try to check out, it’s just that none of them would let me. Maybe I should be thankful. Maybe I should send out a bunch of thank you notes and somehow schedule a reunion. We could all awkwardly stand around some busy emergency room and agree that none of us saw this coming.

But you know the real bitch in all this is? I don’t feel sixty and I’m having a hard time reconciling with the not so subtle changes. It’s like I’m still twenty and trapped in an aging relic of a human shell. I look at old photos of my smiling youth compared to my tired face and say, “How the fuck did this happen?”

I thought fifty was a motherfucker, but it wasn’t shit compared to this.

Hey, now stop laughing. It’s going to happen to you too.