I Finally Went to OA 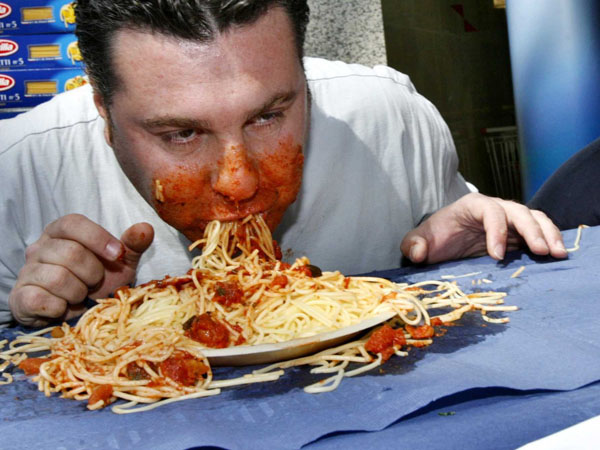 I have an eating disorder. I’m bulimic, and there have been periods in my life when I have been anorexic. I have been dealing with this since early adolescence. As a result, I have a really bad case of body dysmorphia…which feeds into my low self-esteem…which adds to my social awkwardness…which ultimately led me to use drugs…which destroyed my life.

Fourteen years ago, I sought help for my drug addiction and have been clean ever since. However, without copious amounts of narcotics to self-medicate my fears and behavior, the bulimia returned full force.

Last year, I finally hit bottom, and decided I could no longer pretend that I did not have a problem. I was miserable, my health was being affected and I was tired of keeping it a secret from everyone.

My initial plan was to announce I was bulimic and then start to address it in the same 12-step fellowship that I attend for my addiction to drugs. If it worked for heroin, I reasoned, it could also work for food. I then implemented a strict diet to control what I ate, and followed an obsessive exercise regime, which not only helped with keeping my weight down, but also upped my endorphins considerably, relieving my depression. It was a win-win situation—or so I thought until I relapsed at a friend’s party.

I was devastated when it happened, but I vowed to not fall back into the same pattern of overeating and bingeing that had previously been my daily routine. Obviously, my plan worked as long as I was in a controlled environment. But if I was out in real life, I had to be extra-vigilant, or maybe just not go out at all. I immediately jumped right back into exercising and a controlled diet. But then the cravings started. It was like a demon had been awakened inside of me. And much like when I first stopped using drugs, the urge to eat the worst crappy food imaginable gnawed at my brain 24 hours a day. I constantly had to ask for the willingness to make it through each minute without bingeing on food.

And then, there I was in the grocery store on my way to the produce section and I was passing an aisle display of plantain chips. And I thought, Hmmmm, plantains? I’m eating a paleo diet, I can do plantains. So I bought a bag. You know, just to see what they were like. And within a week, I’m eating two to three bags a day. Then I’m gaining weight, then I’m craving more plantains, then I’m right back at square one again, because I’m not talking about it at meetings and I’ve got a new secret that’s keeping me sick. It’s the same old guilt- and shame-fest that I thought I had addressed a long time ago.

So okay, maybe my plan just wasn’t working. And if I really thought about it, if I had kept to this type of thinking with my addiction to heroin, I’d probably still be using. Only, food addiction is so much harder as I simply cannot just stop eating food. I have to abstain from the behavior, not the substance, and so maybe I need some extra help dealing with this.

The Overeaters Anonymous website lists meetings all over the world. I adjusted the dropdown menus to the appropriate categories of country, state and city and a dozen meetings immediately appeared. One of them was that night, a few miles away.

I parked outside the church on a side street and looked the building over. There was a light on in a basement room and I knew that was where the meeting was. I got out of the car and quietly walked toward the open door. I don’t know why I was so apprehensive about going to a meeting where I could find help, but I was. My first attempt at OA in my early days of recovery hadn’t been really positive—or I wasn’t that receptive to what they were offering—and I never went back.

I walked down the steps into the basement. There, in a small classroom with a circle of chairs, two men were sitting together—which sort of threw me since I have always been the only male I know who has, or even talks about having, an eating disorder. The intimacy of the room, and the lack of participants, almost made me turn around and flee.

Sitting down, I said hello and waited for the meeting to start. Fortunately, two women and another man arrived separately and then the secretary began reading the format. Everything was strangely the same as the NA meetings I attend and, at the same time, totally different. There were the 12 steps of OA, the serenity pray, the OA preamble and the seventh tradition. But what was most comforting was when we all introduced ourselves and each participant stated what type of eating disorder they were suffering from—and when it got to me I said, “Hello, my name is Patrick, anorexic/bulimic.” And when the secretary asked if I’d like to share, I told them about what I was going through and why I was there, and, just like when I publicly revealed my eating disorder, there was a sense that I was doing the right thing and in the solution.

I would like to say that I found immediate relief at that meeting, but I didn’t. What I did find was a group of people dealing with the same issues that I am, and that’s what helped me when I first started my recovery from drugs. It has been two weeks now, and I’ve attended that same meeting twice. I’m looking at other meetings and contemplating working the program of OA. I’m back to what OA refers to as a “plan of eating” and exercising daily. I have dropped some of the weight I gained and I’m feeling a lot better about myself.

It isn’t perfect, but then what program of recovery is?