At one point the two cultures nearly clashed. Natasha Moni, who is from Virginia, read: “It wasn’t like we were eating the squirrels we accidentally ran over.” Just then, the loud din of motorcycles revving up just outside began to threaten the mood. Moni, however, saved herself (and maybe the rest of the set) by altering her poem:

We were raised acorn below bicycle, balloon between spokes
The thrill of mimicry
The sound of what sounded like motorcycle
– here there was major laughter, hoots, shrill screaming, and claps –
buzzing like bee
like danger.

Fourteen Hills, consisting of all graduate students in SF State’s creative writing MFA program, faces daunting odds: constant turnover, lack of funds, and changes in administration, to name a few. Yet the people involved still put out a quality publication twice a year. Friday night the review celebrated the release of issue 17.2, welcomed a new staff and said goodbye to the old staff, announced the winner of its annual Michael Rubin Award, held a raffle, featured about half a dozen readings, and still managed to be consistently engaging.

The motorcycles, at first a potential hindrance, may have helped. Creative writing professor Toni Mirosevich addressed the subject: “I had a Kawasaki 90 once. Do you think that would get me in here?” To whistles and laughter she read excerpts from her most recent book The Takeaway Bin, even getting the audience to sing the chorus from the Babes in Toyland song “More, More, More” (“How do you like it? How do you like your looove?”) She raised her hand to prompt the whole room into harmony.

Patrick O’Neil read an excerpt from a book about his time as road manager for a lot of punk bands in the late 1970s and early ’80s. Waking up naked in a young woman’s room in the middle of nowhere, his first thoughts:

My head is splitting.
I need drugs.
I need a cigarette.
I gotta take a piss
… are replaced by fear when the woman tells him her mother is cooking breakfast in the kitchen. 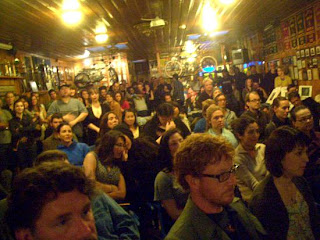 The staff gathered to read a collection of stanzas they wrote together in honor of departing editor-in-chief Hollie Hardy, who has served for three years — six semesters straight.

Daniel Larson took the crowd out to the ballgame — at AT&T Park — only to see “a vendor climbing the aisle empty-handed with his big price button on. ‘Look, Tim: they’re selling Mexicans for $3.75 in San Francisco.’ … And then Juanito said, ‘That’s nothing. For five bucks, I’ll get you a truckload at Home Depot.'” After a few titters from the crowd, Larson reassured everyone: “It’s okay to laugh — we’re just talking shit amongst friends.” Everyone laughed.

There were serious moments, however. Fourteen Hills is not just a journal, but also a press. Each year it bestows the Michael Rubin Award to one first-time author whose book it publishes. This year’s recipient was announced as Keely Hyslop, whose book, Things I Say to Pirates on Nights That I Miss You, is expected to be in print by the fall.

Josh Bettinger read the last poem in issue 17.2, which turned out to be a fitting way to end the evening:

One that
without costly moves into the future, can portray an honest man folding his underwear
beneath a stupid moon.
That is a proper exit.
What I’ve built I’ll name for you.