The Korean missionaries storm the Hollywood Blvd. sidewalk, parting the tourists and street urchins like the Red Sea. Their leader, a short slender woman dressed in black, screams into a megaphone. “Jesus is coming. Jesus is coming. Jesus is coming today!” While the rest of them wave placards stating “Jesus is thy Lord.” A gutter-punk, curled up around his forty-ounce in a closed storefront’s doorway, waves his hand in a heavy metal/Ronnie James Dio two fingered devil horn salute. With an obscene leer he sticks out his tongue and yells, “Fuck off!”

The year was 1978. Mrs. Mario Rubio is making burritos for her husband Eduardo. While heating the flour tortillas she notices a small burn on one of the tortillas that in her mind resembles the face of Jesus Christ. The Rubios, thinking it a sign from heaven, save the tortilla and then tell family and friends of their “miracle.” Word quickly spreads and 8,000 pilgrims descend upon the Rubios’ tiny stucco house in rural Lake Arthur, New Mexico, to view the sacred icon that is later named: “Shrine of the Holy Tortilla.”

It’s twelve noon, the sidewalks are full. There’s the usual riff raff: students from the Musician’s Institute, kids from Hollywood high, out-a-town gawkers, weasels hustling sightseeing tour tickets, and a lunchtime crowd of locals looking for something to eat. A couple of women in torn blue jean shorts and Ugg boots ask me to take their picture in front of Sylvester Stallone’s star. They’re Italian, they gesture with their hands, a lot, and I almost laugh at how stereotypical they are. Framing them in the viewfinder I take their picture and return the camera. One of the women tries to give me a dollar and I tell her that’s okay. She pulls out another and stuffs both in the top pocket of my shirt. Who am I to argue?

The lady who runs the rock and roll clothing store is out front standing by a parking meter smoking a cigarette. I’ve walked by her every day for the last year and a half. She dresses in the clothes she sells. Death metal t-shirts, spiked bracelets, leopard creepers, dark sunglasses, and peg legged jeans. She’s skinny with a long face, a la Patti Smith, and her hair is cut in a Betty Page. Upside down crucifixes hang from her ears. But for some reason she still seems out of place. Like she’s dressing the part and then goes home to flowered Mumu’s and fluffy slippers. I’ve always wondered about her. Usually I say good morning. Mostly she ignores me, and today is no exception.

1986, Jesus’ image appears again, this time in Fostoria, Ohio, on the side of a soybean oil storage tank. Hundreds of people park along rural Route 12, by the Hi-Lo gas station to view the image. Reuters and Time magazine send reporters to interview the locals. Rita Ratchen, a self-employed drapery installer, claims to have sighted Jesus first, but kept quiet, as she didn’t want to be thought insane. A month later vandals attack the storage tank with paint balloons and Jesus disappears.

The missionaries are back. I hear the leader’s amplified shouts before I see them stomping by in a long line. Their chanting sounds like the disjointed rumblings of advancing impending doom. Although I’d say they’re confused, I’m impressed by their conviction. How do they know Jesus is coming? And how can they be so sure it’s today? Weren’t they just here last week proclaiming the very same event? What happens when he doesn’t appear?

The old crone with the two shopping carts filled with filthy rags and torn trash-bags cowers as if afraid of the missionaries. Crouched behind her carts she makes the sign of the cross. Her lips move as if she is reciting prayers. A skinny kid decked out in a sagging blue velour tracksuit with blonde cornrows walks by in the other direction. He’s got large headphones over his ears and he bops his head up and down. His body language and hand gestures mimic the standard rapper’s repertoire of movements as he savagely mouths lyrics to whatever beat only he can hear. 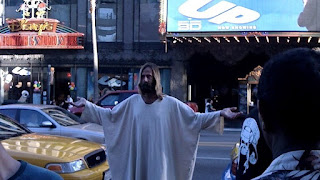 1991, Jesus makes national news again appearing on a Pizza Hut billboard in Atlanta, Georgia. Joyce Simpson, an aspiring gospel singer, sees Jesus’ face in the advertisement after praying for a sign from god. Unable to decide whether to stay in the church choir or sing professionally Simpson turns to divine help. Seeing Jesus’ face in the spaghetti hanging from a fork convinces her to stay with the choir.

Last night was a full moon, and even though it rained, today the streets still smell like piss. Yet, as far as I know no one has seen Jesus’ face in the urine stained sidewalks. Two blocks up, by the Kodak Center, out of work actors and assorted weirdos dress as super heroes and movie stars and pose for the tourists for a few bucks a shot. There’s Michael Jackson, Spiderman, Bart Simpson, and Marilyn Monroe. And yes, mixed in with all the fantasy is who else, but Jesus – the pre-crucifixion Jesus. Which basically means a longhaired hippie looking white guy in a coarse burlap robe, sandals, and a beard. Every once in a while I see him getting on the bus to go home after a hard day of having his picture taken by tourists. He looks tired, and a bit malnourished.

2005, the Lee family of Toledo, Ohio, is preparing for Easter dinner. Donna Lee is frying premade pierogies she bought from a store. She flips one over and sees Jesus’ face is the scorch marks. “Oh my God!” yells Donna. Her husband Tommy agrees, “there’s a face on the pierogi, except it ain’t god, it’s Jesus.” Both Donna and her husband were born and raised Catholic. They pray daily and know the value of a holy icon. “We put it on eBay,” says Tommy. The minimum bid was $500. “Everything happens for a reason, and I think this one did. I truly do,” says Donna. The Lee’s sell the Jesus pierogi for $1775.

I’ve got my newspaper and coffee and I’m less than a block from home. Once you get off the Boulevards the traffic is light, and there’s no pedestrians. With the crazy weather lately all the trees are in bloom as if it were Spring. The bushes in front of the houses are overgrown and blocking the sidewalk. I turn the corner and almost collide with the Russian hooker in a wheelchair. I’ve seen her around, but I’ve never spoken to her. She cruises the back alleys and plies her trade in the shadows, driveways, or behind my building’s dumpster. She’s dressed in a mini skirt, fishnets, a see-through blouse, and high heels. There’s a messy blonde wig on her head, and her make-up is dense and crusty. Even though she’s in a wheelchair she doesn’t use her hands to move the wheels – instead she pushes herself backwards with her feet.

“Hey,” she says. Her accent thick, made more difficult to decipher with the slur of alcohol, drugs, or maybe both. “I’m Mary. You vanta have a go?” Hanging around her neck is a silver medal of Jesus’ head with the crown of thorns.

I am momentarily speechless. I stand there with my coffee and newspaper in each hand and fumble for words. When none come I simply say no.