Big Food in the Heartland of America

“Hi, welcome to Taco Bell. Hope you’re having a nice day.” said the girl standing behind the counter. Her monotone voice so void of emotion it could have easily been computerized.

“Define nice,” I answered, and looked around at all the brightly colored plastic and brushed aluminum and wondered why this was what fast food corporations thought a restaurant should look like.

“That your world is wonderful and you’re happy to be alive,” she said with absolutely no enthusiasm as she stared at her pale pink lacquered fingernails. Obviously this part of the conversation wasn’t the official Taco Bell greeting she was required to say.

“Can we just forego that statement?” I asked, and stared at the menu above her head.

An audible sigh escaped her lips as she slowly ran her hand back and forth over the face of the computerized cash register. She looked to be about nineteen, but the sadness in her eyes said her age didn’t matter. Trapped in this shithole highway town working a stale-ass job, her future worse than bleak, she now had to deal with someone who wasn’t going along with his part of the script.

I never eat at fast food restaurants. Or at least I try not to. Driving back from LA, I thought I could last the five hours without having to consume a meal. And then there I was just north of Bakersfield and my stomach started growling. It was four in the afternoon and I realized I hadn’t eaten anything all day. Still I had a full tank of gas and really didn’t need to stop so I pushed on and drank water instead.

But then the wind started blowing really hard across the highway and tumbleweeds attacked my car en masse – splattering their twig guts across my hood and getting stuck in the windshield wipers. I could only cringe at the thought of all those little scrapes in the paint finish, but what was I to do? Swerve into another lane and crash? I’d already seen a semi tossed on its side blocking the southbound lanes. Obviously this wind wasn’t something to mess with. Then I looked across the highway and saw the oncoming cluster of gas stations and fast food outlets and thought why not, I’m hungry, how bad could it be?

“I need something vegetarian. You know, with no meat,” I said and then realized how stupid that must sound.

The Taco Bell girl just looked at me and pointed to the menu behind her. More than slightly overweight, her plump arm hung in the air, the extended finger looking like the all American hotdog that was absent from the south of the border menu. Her long black hair crammed into the Taco Bell cap on her head appeared to be on the verge of escaping, while both sides of her face were covered with pimples – the obvious result of working around greasy fried foods. Wondering if she ever ate any of the stuff she served, I decided that of course she did. What the hell else was there to eat out her in the middle of nowhere.

“You got vegetarian nachos, right?”

The Taco Bell girl lifted her chin towards a sign on the wall next to the soda dispenser that pictured three nacho specials. The regular nachos appeared to have ground beef and some kind of cheese wiz. Then there was one with sour cream, cheese wiz and refried beans. The last looked to be the same but with salsa and guacamole.

“Those the three and seven layer?” I asked as I pointed toward the sign. “And they don’t have meat?”

“Uh huh,” she said without looking at me.

As I handed her money and waited for my change, a rather large suburban couple came in the restaurant and stood in line behind me. “I love the beef burritos,” said the women. Her male counterpart grunted as he looked at the menu. Holding my receipt I moved over to give them room.

The Taco Bell girl stared at them for a second before she said, “Hi, welcome to Taco Bell. Hope you’re having a nice day.” Then she looked at me and I could see the reality of her life smoldering in her eyes.

“I could eat a dozen,” said the women, and then she giggled.

The man grunted again and I lost interest and turned to look at the passing traffic on the highway. While they were deciding on the quantity of burritos, the room went silent and I could hear the wind as it blew across the valley and slammed into the plate glass windows. An hour ago I’d driven past a giant industrial feedlot. Acres and acres of cows standing in their own shit staring off into space – the wind blowing the stench into my car so bad I actually gagged. I can’t believe that it’s come to people treating animals like this. But what can we expect in a world where there has been an Auschwitz as well as other inhumane concentration camps? 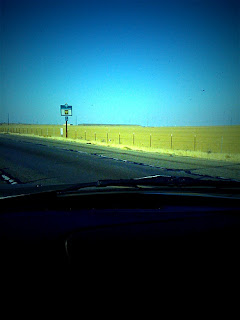 Outside a massive tumbleweed rolled across the parking lot and into the street. The gust of wind that was pushing it slammed into the windows and the side of the building shuddered.

“Oh my, that wind,” said the woman as she and the man carried their large empty cups over to the soda machine.

“Your order,” said the Taco Bell girl as she pushed a tray across the counter towards me – the two small cardboard dishes of nachos sliding forward.

The Taco Bell girl stared at me and said nothing. There was no expression on her face or in her eyes. She’s obviously let me see too much and now she’d closed it all down and called it quits for the day.

“What’s there to hate?” she said as she splayed her upturned hand towards the restaurant’s interior.

I took my tray and walked over to the condiments and grabbed a packet of hot sauce, a napkin and a fork. At a table sticking out from the wall I sat down and looked at my food. The guacamole, cheese whiz and salsa could almost glow in the dark. “I’m gonna regret this,” I said and then took a bite. There was absolutely no flavor, and the cheese whiz stuck to my teeth like caulk. Grabbing the packet of hot sauce I tore it open and squeezed the dark red contents over both plates of nachos.

“Your burritos are ready,” said the Taco Bell girl and the man got up from his table and walked to the counter.

“Get some hot sauce,” said the woman and the man grunted as he grabbed the tray.

Another tumbleweed came screaming across the parking lot and smashed into the window next to my table and hung there pressed against the glass like it was fighting to get inside. Slowly the wind forced it along the wall of windows and with a final blast sent it around the corner and out of my sight.

I couldn’t eat either order of the nachos. There was no taste to any of it, and the hot sauce just made it worse. Wiping my mouth with the napkin I looked up and saw the Taco Bell girl staring at me. When our eyes met she held my gaze and then she looked at the floor. I thought about what it must be like to live here, and then realized I had no idea what that even entailed. There wasn’t a real town for a hundred miles in any direction. So I assumed she either lived in some farmhouse out in the middle of a field, or in one of the desolate trailer parks I passed a few miles back.

Grabbing my tray I stood up and walked to the trash container and flipped open the lid to drop in my uneaten food. Putting the tray on the shelf above the trash I turned to the Taco Bell girl and said, “Thanks, see ya later.” Then I walked out the door wondering why I had said that. I’ll never see her again and I sure as hell won’t stop here to eat if I can help it.

The wind blew dust into my eyes as I opened the door to my car and got in. Wiping my face with my sleeve, I turned the ignition key and buckled my seatbelt. Through the windshield I could see the Taco Bell girl standing alone at the counter behind the cash register. Another portly couple with a bunch of fat kids got out of their mini van and started walking across the parking lot as I pulled away and headed for the freeway onramp.