I have this big head. I was born with it. I see it in every damn mirror, darkened store window, even in the dull reflection of a car’s windshield. When I’m standing in line at a convenience store, I helplessly stare at the surveillance monitor hovering behind the counter and see myself squished up black and white– my head so goddamn big you can’t miss it. With all my blonde hair sticking out all over the place it almost glows in the dark like a plastic Jesus nightlight. Look at any photo that’s ever been taken of me and you’ll see. There’s this big block of a head on my shoulders – a big, big, big head just sitting there.

It’s so big only half my face fits on my driver’s license. My passport photo is all chin, nose and a couple of eyes – it could be any freckle-faced Irish guy named Patrick Sean O’Neil. My profile photo for MySpace sucks too. My head won’t fit in that little frame they give you. But what do I care? Damn near everybody in the entire universe is leaving sleazy MySpace for Facebook. Only Facebook blows just as bad. My goddamn big head won’t fit in their photo restrictions either. And don’t even talk to me about Twitter, flickr, Blogger, Gmail, Yahoo, goodreads, or LinkedIn. I really don’t need another social network, email address, or a place to post my writing, photographs, or résumé. But I’d be happy if just one of them was big head friendly.

“Fuckin big head,” I mumble, and then stare directly into your eyes and say, “my head look big to you?”

Back when he was still alive and just starting out his career as a big time media mogul, Merv Griffin did some studying and figured out television audiences loved people with big heads. He discovered they looked better than someone with a regular normal size head on the TV screen. What with the way bodies got stretched out and compressed, and everyone looked ten pounds heavier, a big head sort of anchored the torso down as it got projected through the cathode ray tubes. Plus, he figured people would trust someone with a big head because they’re brainy, or actually they appear to be brainy. One would hope a big head was full of brains, and not half vacant with lots of room to spare. So old Merv, whose own head wasn’t exactly petite, searched and searched until he found Pat Sajak and Vanna White with their big heads, and signed them up to host his game show, Wheel of Fortune. You can check this out if you don’t believe me, the man made millions. Hell, Vanna and Pat have been hosting that goddamn show for years – still successful as all hell – supposedly all due to the size of their heads. Not that I’m suggesting my head is full of brains, or I should host a game show. Hardly. I’ve just done a bit of research into this big head deal.

So, little Johnny comes home from school crying and says, “Mommy all the kids at school say I’ve got a big head.”

And his mother says, “No you don’t Johnny. You have a hideously deformed head. The other children are merely hiding the truth to protect your feelings.”

And yes, that mild attempt at big head humor gently segues us into the other possibilities for my enlarged head. Horrible medical anomalies like Proteus Syndrome: a rare genetic disorder characterized by overgrowth of bones, fatty tissues and skin. Or Acromegaly: a hormonal disorder involving excess growth hormone production by the pituitary gland. Or even Hydrocephalus: a condition in which the primary characteristic is excessive accumulation of fluid in the brain. But I’m not experiencing any of the usual symptoms associated with any of those diseases: excess of fluids, headaches, vomiting, loss of balance, enlarged extremities, or bony skull prominences—the later of which sounds more like building an addition onto your skull than a symptom. Besides, as of just last month my doctor assured me I’m not suffering from any of these said abnormalities. Although he has requested I stop snooping around the medical libraries looking for any other ailments I might possibly be afflicted with. He mumbled something about that being his job and why don’t I get the hell out of his office before he put a world of hurt on my magnus caput capitis.

“Do you hear any noise when I think?” I asked him and then massaged my temple with a gummy bear – an organic vegan gummy bear. Because I like to go for the best when I practice holistic medicine.

Yet all the news isn’t bad. In the 19th century, Cesare Lombroso, an anthropologist from the Italian school of criminology, preformed numerous autopsies on deceased criminals in an attempt to outline the fourteen physiognomic characteristics, which he believed to be common in all criminals, the foremost being a small head. So Okay, past digressions aside, my big head doesn’t render me prone to common criminality, at least not in 19th century Italy.

“Yo mama head so big it shows up on radar.”

I remember playing soccer in 8th grade and Anthony Fragamini wanted me to be goalie, and I didn’t want to be goalie. I hated being smacked by the ball, or having to dive for it and roll around on the grass. Besides, the field we played on was covered with broken glass, cigarette butts and beer cans. Every once in a while you’d find a used rubber because the local thugs hung out there at night and partied with the girls from the Catholic school.

And he said, “I’ll give you a dollar.” Because Anthony was team captain and took that shit seriously, he always wanted to win, to beat the other team and run around the field like a fool.

“Man, fuck yo dollar,” I yelled and started to walk to midfield to play halfback like I always did.

“But you ain’t gotta do shit,” he yelled after me. “Yo big head’ll stop half the balls from gettin through the goal.”

Seems like when I was a kid my head was even bigger. There’s a picture of me as a baby. Nine pounds, ten ounces, and the nine pounds was all head. I got this expression on my face, looking at the camera like an old man and I’m only a couple days old – the burden of a big head. 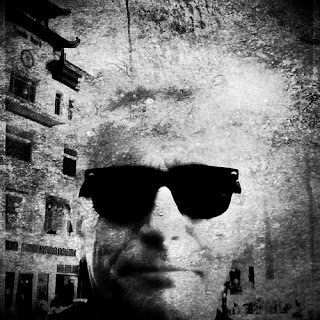 I look over at my reflection in the full-length mirror, a tailor’s measuring tape wrapped around my forehead. I squint to read the numbers. Inches, metrics, I can’t tell, I forgot my glasses. Slowly I slump to the floor. The tape slithers off and curls up in the corner. A molting rabid cat comes running. I grab its tiny head with both my hands. Its mouth opens in a hiss. Teeth bared it screeches to the heavens above.

“It ain’t like I come from a long line of big heads,” I say as I pull the cat’s claws out of my skin. “Or every other generation there’s a big head or two poppin up off the family tree like a freakin bobblehead doll. Shit, as far as I know none of my relatives have ever hosted a game show.”

The cat licks its lips and eyes me like a can of sardines. I reach for the measuring tape, but it has inched its way further down the hallway. A telephone rings somewhere off in another room. The smell of gasoline is strong in the stagnant air. I wonder who could be calling this late at night. My fingers touch the stained carpet as I push myself up off the floor.

“Nope, this is my cross to bear,” I say and realize I’m alone. The cat has run off and the only thing keeping me company is the reflection of my big head in the mirror.