Waiting at the Gilbert

The old man is six feet away, but I can still smell him. It’s a permeating stench. A mixture of piss, dirty socks, unwashed body, and a bunch of other rancid smells I don’t want to indentify let alone drift up my nostrils. He’s digging in a trashcan with a folded coat hanger. Snagging aluminum cans and plastic bottles with a cool dexterity, like a short order cook flipping burgers on a grill. When he hooks one, he yanks it out and holds it upside down draining whatever liquid is inside. Then he tosses it on the sidewalk and crushes it with his foot. He’s making a lot of noise for 2AM. But it’s a Saturday night in Hollywood, who the hell cares?

We’re at the corner of Wilcox and Selma getting bathed in an eerie green light from the Gilbert Hotel’s neon sign. I was thirsty and stopped to drink from a bottle of water I had in my bag and the old man asked if he could have it when I was done. Now I’m standing here drinking what’s left and sweating in the heat while he grabs another can and smashes it.

A black and white pulls up and the young looking cop inside gives me the once over. I stop drinking, lower the bottle, and stare back. So does the old man. The cop that’s driving leans down so he too can see us. We all stare at each other for a few seconds, then the car’s lights and siren come on and it leaps away from the curb, the tires screeching as it tears up the street.

The patrol car swerves around the corner, the siren fades, and a metallic rumbling takes over, echoing off the surrounding buildings getting louder. I turn and see Iggy Pop, or maybe he’s more like Steve Buscemi, rolling up pushing a shopping cart. He’s short, dressed in black, and skinny as hell. His mop of dirty blond hair looks like a rug that needs cleaning. He shoves his cart against a signpost so it won’t roll away, and then sits on the curb, his feet in the street. I stare at him wondering what kind of life this guy has. Then I take another drink and come to the conclusion I don’t care.

The old man nods in agreement, then smashes another can.

“Shit, I ain’t got no money. Get the fuck outta here.”

Iggy just sits there and stares and I go back to finishing my water. Although why I’m drinking just so the old man can have my bottle when he’s got a bag full doesn’t seem that urgent a problem. Then I notice the old man is talking, sort of under his breath, but it’s still audible.

“What, he’s only talking to you or something?”

Iggy looks confused. He thinks I’m fucking with him. Like it’s some kind of joke about him. Which is probably what happens to Iggy all day long. Or at least in his mind it does.

When I realize he means me I tell him no I’m still drinking and he says to take my time, there’s no hurry. Which is nice and I wish it were true, but I’m always in a hurry. I hate waiting. I want everything now, and when it doesn’t come I have to get my mind off thinking about it. Which makes me do shit like walk around all night because I can’t sleep and I’ll lie in bed staring at the ceiling worrying about all this crap I can’t do a goddamn thing about.

“What are you doing here?” says the old man.

“Sure as hell ain’t asking that guy,” he says and points his coat hanger in the general direction of Iggy. 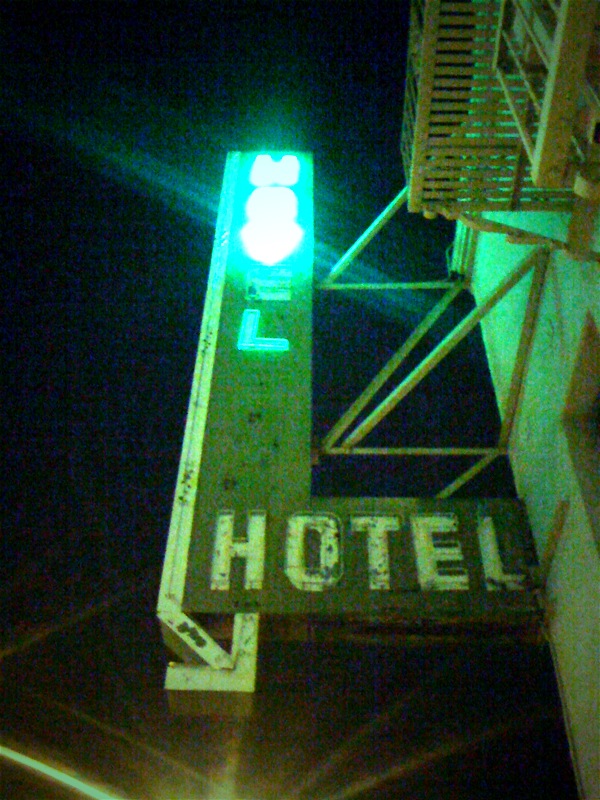 The old man rubs his chin with a filthy hand and nods his head. Then he slips his fingers into his shirt pocket and pulls out a half a cigarette. Lighting it, he sucks in smoke and stares up at the sky. “I’m waiting too, ” he says. “Waiting to die.”

“My waiting is a little more ambitious,” I say. Only I wonder if that’s true. I mean what’s more ambitious that wanting to die? Mine’s also a little less final. I’m waiting for word from this press saying they’re either going to publish my book, or they’re not. This has been going on for the last six months. I’d sent them a cold query and the book’s first thirty pages. Then they’d gotten back to me, said they liked it, and could I send the whole book. Now I’m supposedly in the final running and they’re making their decision, and tomorrow’s the day I find out. Which is why I’m out wandering the streets at 2AM.

A fat guy with a mass of curly hair wearing a huge oversized Slayer t-shirt suddenly appears. He’s talking really fast, apparently to himself, but I still check to make sure he’s not wearing a Bluetooth headset, and of course he’s not. The front of his shirt is covered in weird white stains. His shorts hang off his ass from a studded belt and sag down to his knees and I wonder how the hell he can walk like that? He stops next to the old man and looks around, then asks where he is. He says he thinks he’s at the wrong bus stop. Which is sort of true – except there’s no bus stop because buses don’t run on this street. I peg him for a drug casualty and turn away.

“Know where a post office is?” asks the fat guy.

I want to tell him it’s late and the post office is closed. But the fact is there’s a post office right across the street. So instead I say yeah and point, hoping he’ll go away.

“I gotta cash my check,” says the fat guy.

The old man looks at the fat guy and then glances at me and shakes his head. Suddenly Iggy is on his feet. Like a predator surveying prey he circles the fat guy. There’s a weird look on his face as he fidgets and his arm muscles tense.

“Ow!” screams Iggy as the old man smacks him in the face with the coat hanger.

“Get outta here boy,” says the old man. The fat guy grabs his belt and waddles down the street disappearing into the darkness. Iggy rubs the side of his face, his expression like a hurt kid.

I wasn’t gonna do nothin,” he says.

“Why you waiting at the Gilbert?” says the old man, ignoring Iggy. Then I notice his outstretched hand gesturing toward the empty bottle I’m holding.

“I’m not at the Gilbert,” I say and give him my bottle.

“Yes you are,” he says and then drops it on the ground and crushes it under his foot.

Iggy shoves his cart around and starts pushing it back the way he came. “Fuck you man,” he says, then he stops and I think I hear him crying.

The old man lifts his garbage bag full of crushed recyclables. There’s holes in the bottom and liquid drips on the sidewalk. When he moves I can smell his stench again. I begin to leave, but he starts talking.

“You know, it’s not waiting when its something you have no control over,” he says and shifts the bag on his shoulder. “Life’s gonna play itself out. You’re just along for the ride.”

I watch the old man as he heads towards Sunset Boulevard. Behind me I hear Iggy sniffle, then he starts pushing his cart in the general direction of where the fat guy went. I hold my hand up to my face, the skin looks dead under the green glow of the neon hotel sign. I know the publishers aren’t going to call tomorrow. They’re a business, they have a lot of books and authors to deal with, and I’m taking it personally. I just don’t like waiting.

The door to the Gilbert Hotel opens and a woman walks out. She smiles at me, holds a cigarette, and asks if I have a light. I tell her I don’t and we stand there staring at each other.

“You staying here?” she asks.